On This Day In Sport, April 22: Sachin Tendulkar Goes After Shane Warne, Manchester United Done With The 'Chosen One'

April 22 is a significant day for Manchester United, for good and bad, while it is a date Lennox Lewis and Shane Warne would like to forget 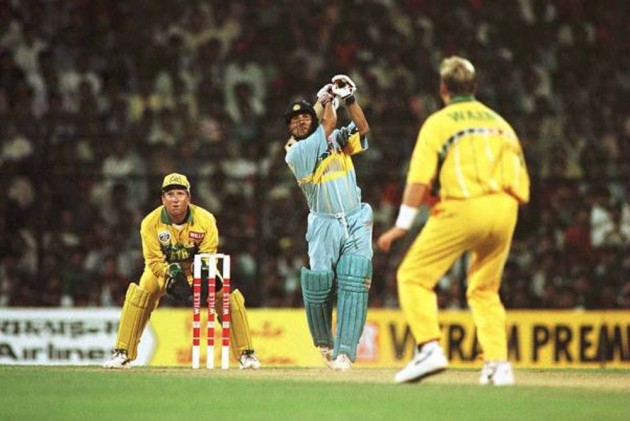 While for Red Devils legend Ferguson it is a day that ensured he bowed out from the game as a winner, something he became very accustomed to being at Old Trafford, for Moyes it is a day where a prophecy went unfulfilled.

Lennox Lewis will want to remember the date about as much as Moyes, while Sachin Tendulkar and Shane Warne engaged in a memorable showdown.

Below we take a look back at some significant moments of sporting history on April 22.

It was unbeknownst at the time but Robin van Persie's superb first-half hat-trick in a 3-0 win over Aston Villa – including that volley from Wayne Rooney's assist – would take on extra significance.

The victory ensured United wrested the title back from rivals Manchester City, delivering a 13th Premier League trophy under Ferguson and a 20th top-flight triumph for the club overall.

Just over a couple of weeks later, Ferguson announced he would be stepping down after 26 glorious years that returned 38 trophies.

Ferguson is reported to have hand-picked Moyes personally as his successor, leading to him being dubbed the 'Chosen One' by the United faithful…

Exactly a year later and the situation was worlds apart from the celebrations that saw United toast their latest title triumph.

Moyes was sacked just 10 months into a six-year contract with the champions, with United languishing down in seventh and guaranteed to record their lowest-ever points tally in the Premier League.

United particularly struggled at Old Trafford, so long a formidable fortress under Ferguson, while fans grew impatient with a docile style of play.

Louis van Gaal and Jose Mourinho have been and gone without returning United to the top of the pile, while Ole Gunnar Solskjaer's experiment remains a work in progress.

Lennox Lewis was the overwhelming favourite for the 'Thunder in Africa' against 20-1 shot Hasim Rahman in South Africa back in 2001.

But in one of the greatest upsets in boxing history, Lewis was floored by a strong right in the fifth round leaving the Briton unable to answer the count and surrendering his WBC and IBF heavyweight belts.

By November of that year, Lewis – after some legal wrangling – had his rematch and regained the belts with a fourth-round knockout.

#OnThisDay in 2001, I lost the @wbc IBF, IBO & Lineal titles to Hasim Rahman in South Africa.
-
Great punch that my chin didn’t get out of the way of! pic.twitter.com/MLq6J7p2LI

The record books will show Australia victorious by 26 runs, with India falling short in a revised target.

But the match against India was remembered for one particular legend v legend moment between Warne and Tendulkar.

Tendulkar masterfully judged the flight of Warne's delivery, smothered the spin and with astounding speed whacked the ball into the billboards at long-on.

Warne wiped the sweat off his face, knowing the personal battle on that occasion was emphatically lost.