On This Day In Sport, April 25: Title Glory For Arsenal 'Invincibles', Cristiano Ronaldo Misses For Madrid

Arsenal won the English league title on this day 16 years ago, and April 25 was a painful 2012 date for Jose Mourinho and Cristiano Ronaldo 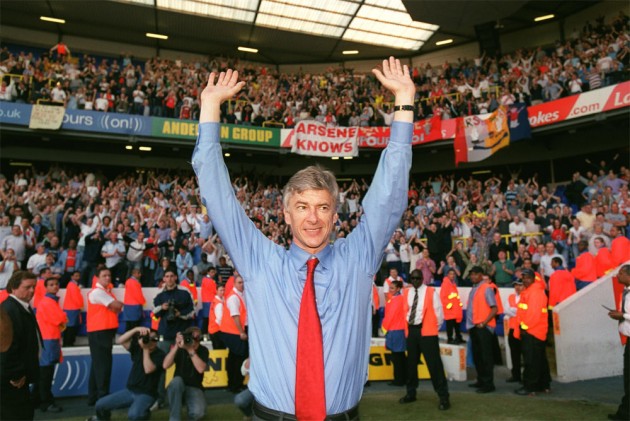 Arsenal may have gone 16 years without an English league title, but the last time they landed the trophy it was an unforgettable triumph for Arsene Wenger's 'Invincibles'. (More Sports News)

They secured the silverware for the competition then known as the Premiership on this day in 2004, with a 2-2 draw against bitter north London rivals Tottenham.

On the same day, Sri Lanka humiliated Zimbabwe in an ODI cricket clash in Harare, bowling out the home team for 35 - the lowest innings total for a one-day international.

In 2012, Bayern Munich denied Real Madrid a place in the Champions League final when they beat Los Blancos, whose star names faltered in a dramatic penalty shoot-out.

And 12 months ago, Kyler Murray chose American football ahead of baseball when he was drafted first by the Arizona Cardinals.

Here we look back on some of the most memorable moments from the world of sport to take place on April 25.

Alan Shearer's winner for Newcastle United against high-flying Chelsea earlier in the day meant Arsenal had the chance to scoop the Premier League title at Tottenham's White Hart Lane home.

Unbeaten in the league all season, Wenger's side were not in the mood to let such an opportunity pass them by and swept into a 2-0 lead by half-time thanks to goals from Patrick Vieira and Robert Pires.

Jamie Redknapp pulled one back and Robbie Keane fired a late penalty equaliser for lowly Spurs, but Arsenal had needed just one point, so the 2-2 draw was enough to spark celebrations among the visitors.

April 25 will always be a special day for us...

On this day in 2004, we won the league at White Hart Lane... again  pic.twitter.com/TtmBFXSLMQ

Zimbabwe lost the ODI series 5-0 and suffered back-to-back huge innings defeats in a 2-0 Test trouncing by Sri Lanka - and this surrender in the third ODI was perhaps the worst of that grisly set of results.

Dion Ebrahim top-scored for Zimbabwe with seven runs as the hosts were skittled for 35 in 18 overs, Chaminda Vaas taking 4-11 with the ball for merciless Sri Lanka.

Sri Lanka missed out on a 10-wicket victory when Russel Arnold fell cheaply, but they sauntered to a nine-wicket success to ease 3-0 up in the series.

There were extenuating circumstances, with Zimbabwe hugely weakened due to their established players going on strike in a protest over political interference.

2012 - Penalty woe for Ronaldo and Ramos

Armed with a 2-1 semi-final lead from their home leg, Bayern nevertheless appeared to be seeing the Champions League final slip out of sight when Cristiano Ronaldo fired Madrid 2-0 up inside 15 minutes at the Santiago Bernabeu, only for ex-Real winger Arjen Robben to revive the Germans' hopes with a penalty.

The tie was locked at 3-3 on aggregate after half an hour of a breathless second-leg battle and it remained that way after 120 minutes, meaning penalties would decide who joined Chelsea in the final.

The usually reliable Ronaldo and Kaka saw their kicks saved by Manuel Neuer, and Sergio Ramos fired over the bar, allowing Bastian Schweinsteiger to convert the winning penalty.

2 - Cristiano Ronaldo has missed the 2 penalties he's taken in a Champions League shoot-out, against Chelsea in 08 & Bayern tonight. Nerves.

Kyler Murray was the ninth overall pick in the MLB Draft in June 2018, having had his choice of sports. But his continuing success with the Oklahoma Sooners in college football meant Murray was coveted by NFL teams too, and he soon gave up the approaching prospect of a baseball career.

A quarterback, he was drafted first overall by the Cardinals and became a resounding hit in his first NFL season, winning the league's Offensive Rookie of the Year award.

He bettered all other first-year players with 349 completions - the third-most by a rookie in NFL history - and 3,722 passing yards.