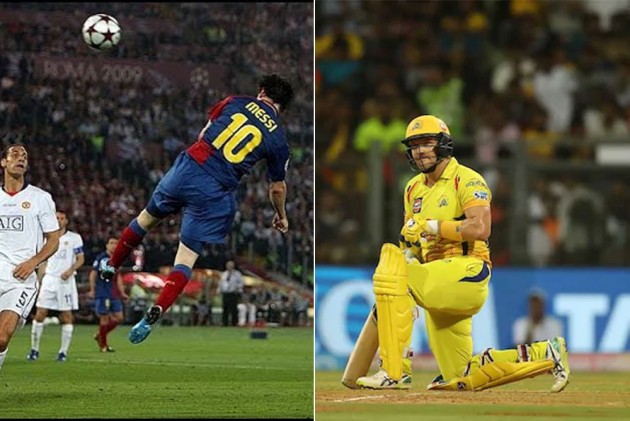 Lionel Messi delivered a moment of history for Barcelona on this day in 2009, as Manchester United lost the Champions League final in Rome. (More Sports News)

Arsene Wenger also has fond memories of May 27 from his Arsenal career, having achieved an unprecedented FA Cup feat at Wembley three years ago.

Shane Watson powered Chennai Super Kings to 2018 IPL glory, while back in 1995, the great Jonah Lomu scored the first tries of a famous New Zealand career.

Join us in looking back on some memorable moments from this day in years gone by.

One of rugby union's all-time most famous faces made his mark on this day back in 1995.

Lomu scored his first two tries for New Zealand as they claimed a 43-19 win over Ireland in a Pool C clash at the Rugby World Cup in Johannesburg.

He finished the tournament as joint-top try-scorer on seven as the All Blacks reached the final, where they were famously beaten by hosts South Africa.

It is two years since a spectacular innings from Watson secured Indian Premier League glory for Chennai Super Kings.

Questioned for putting their faith in a squad of players approaching the end of their careers, it was fitting that Chennai's triumph would be sealed by 36-year-old Watson's unbeaten 117 from 57 balls.

Watson hit eight sixes and 11 fours to dominate the contest, the Super Kings easing to an eight-wicket win with nine balls remaining.

Barcelona became champions of Europe on this day 11 years ago, denying Manchester United a piece of history and securing their own place in the record books.

Holders United were looking to become the first team to win back-to-back Champions Leagues in the modern format but were dealt an early blow when Samuel Eto'o squeezed a 10th-minute shot past Edwin van der Sar.

A header from Lionel Messi – a goal he still considers the most important of his career – made it 2-0 in the second half as Barca won the treble for the first time in their history in Pep Guardiola's first season in charge.

Arsene Wenger became the most successful manager in FA Cup history three years ago when he lifted the trophy for a seventh time.

Premier League champions Chelsea were favourites, but a fourth-minute goal from Alexis Sanchez set the tone for the final.

Victor Moses' red card 68 minutes in made life tougher for the Blues and, although Diego Costa grabbed an equaliser, Aaron Ramsey struck what proved to be the winner three minutes later.

Aside from Wenger's feat – his 10th major trophy as Gunners boss – it was a final fondly remembered by fans for the performance of Per Mertsesacker, who was outstanding at the heart of defence.

THE FINAL OF FINALS

The results are in...

You voted @Arsenal  @ChelseaFC (2017) the best #FACupFinal of all time! pic.twitter.com/G1kjJvKs7X