One For The History: When Sachin Tendulkar Tamed 'Desert Storm' To Blow Australia Away In Sharjah - MUST WATCH VIDEOS

Needing at least 254 to book a place in the final, things became a bit trickier for India as a sand storm erupted and the match was halted for some time, but there was Sachin Tendulkar 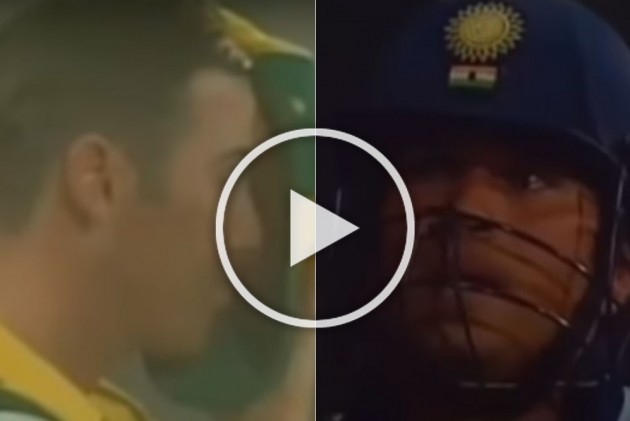 Former India cricketer Sachin Tendulkar is regarded as one of the finest batsmen ever to grace the sport, if not the best. The stylish right-hander set multiple batting records during the course of an illustrious career that spanned over two decades. (More Cricket News)

On this day, 22 years ago, Tendulkar played one of the most eye-catching innings of his life against the high-profile bowling line-up of Australia in the Coca Cola Cup in Sharjah.

Against all the odds, Tendulkar single-handedly powered India into the final with his astonishing 131-ball 143 at Sharjah. Although the 'Master Blaster' couldn't power India over the finishing line in the match but did manage to drag them into the title clash against the same opposition.

Batting first, Australia set a commanding total of 284/7 in 50 overs, courtesy of an unbeaten ton from Michael Bevan and Mark Waugh's 81. Venkatesh Prasad was the pick of Indian bowlers as he ended with a two-wicket haul.

India required 254 to seal a place in the final as it would have helped them beat New Zealand's net run rate. Things became a bit trickier for India as a sand storm erupted and the match was halted for some time.

India's revised target after the break was set at 276 in 46 overs or 237 in 46 overs for a place in final. Tendulkar took note of the revised numbers and conjured a boundary-laden storm of his own in the middle of the iconic stadium.

The likes of Damien Fleming, Michael Kasprowicz and Shane Warne had their task cut out as Tendulkar kept hammering them for runs even as wickets continued to fell on the other end.

He was particularly hard on Warne, who saw his deliveries sail over the ropes many-a-times. The image of Tendulkar coming down the track, hitting a straight maximum and Warne swatting away flies, looking in bewilderment is still etched in memory of every Indian cricket fan.

Tendulkar's show was finally brought to an end by Fleming after the right-hander went for a pull shot and ended up edging the ball to wicket-keeper Adam Gilchrist. His innings included nine fours and five sixes but it wasn't enough for India to win the match but it did give them a ticket to have another crack at Steve Waugh's troop a couple of days later.