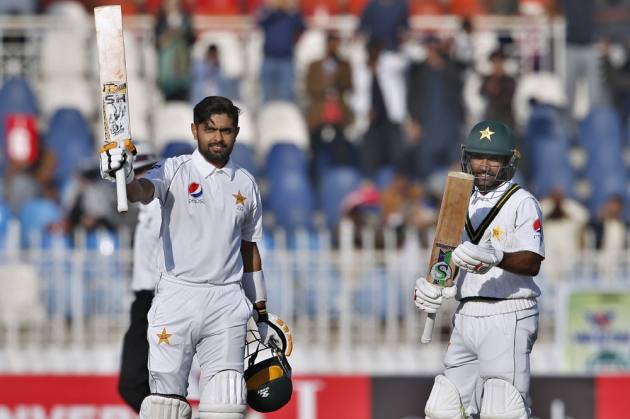 Babar Azam continued his incredible form by reaching a career-best 143 not out as Pakistan took charge of the first Test against Bangladesh at Rawalpindi.

Coming in at number four, Babar was dropped by Ebadat Hossain when he had only scored two and went on to punish the tourists, firing 19 fours and a six off 192 balls.

Shan Masood (100) scored a century of his own as Pakistan ended Saturday's action on 342-3, 109 runs ahead of Bangladesh with seven wickets in hand.

Abu Jayed (2-66) had Pakistan on 93-2, but Babar shared stands of 112 with Masood and 137 with Asad Shafiq, who will be looking to become Pakistan's third centurion of the innings when he resumes on 60 not out.

Bangladesh made an ideal start when Jayed removed Abid Ali for a duck, the opener edging behind to Liton Das from a short and wide delivery in the second over of the day.

Pakistan captain Azhar Ali (34) also fell before lunch, taken at slip off the bowling of Jayed.

That brought Babar to the crease and he did not score in 14 deliveries before lunch and then had a major let-off in the third over of the second session.

Taijul Islam thought he had his man but Edabot could not hold the catch at long-off, a mistake he would regret increasingly as the day progressed.

Masood had already reached 65 by that point and he had his third Test century off 157 balls with a single to fine leg, having hit 11 fours.

But in the next over he was bowled by Taijul (1-111) just before tea in what proved to be the Tigers' last wicket of the day.

Babar brought up his fifth Test ton off 137 balls when he hit Taijul for four and kept his foot on the accelerator from there.

Shafiq reached his fifty from 83 deliveries as part of a useful supporting role, with both players now eyeing big individual totals on day three as Pakistan look to put the match out of reach.

In-form Babar, already on his highest Test score, has now scored a century in four of his past five matches, and had an innings of 97 in the other.