Pakistan had the better of the majority of the opening day, but South Africa are on top after reducing Babar Azam's side to 33-4 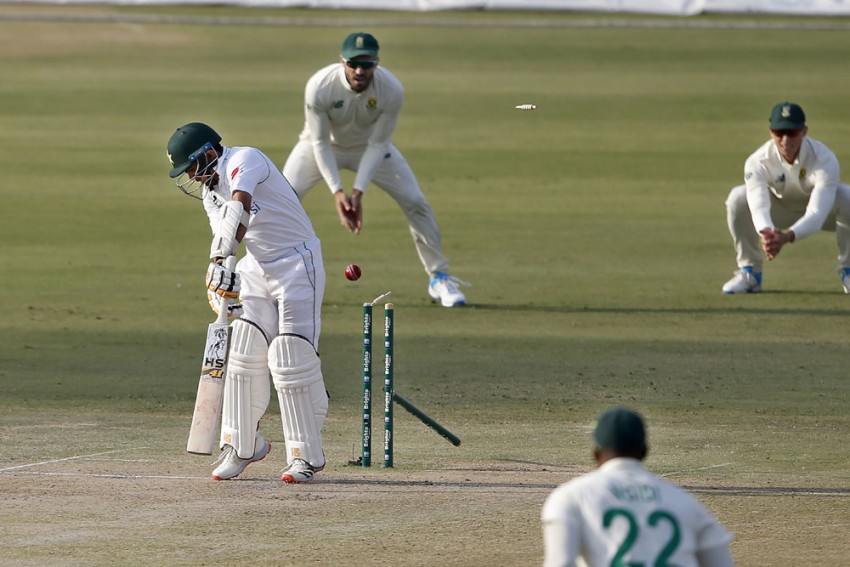 Pakistan's batsman Abid Ali is bowled out by South Africa's pacer Kagiso Rabada during the first day of the first Test at the National Stadium, in Karachi
AP Photo/Anjum Naveed
Omnisport 2021-01-26T21:31:21+05:30 PAK Vs SA, 1st Test: Kagiso Rabada Burst Puts Pakistan In The Mire As 14 Wickets Fall On Day 1 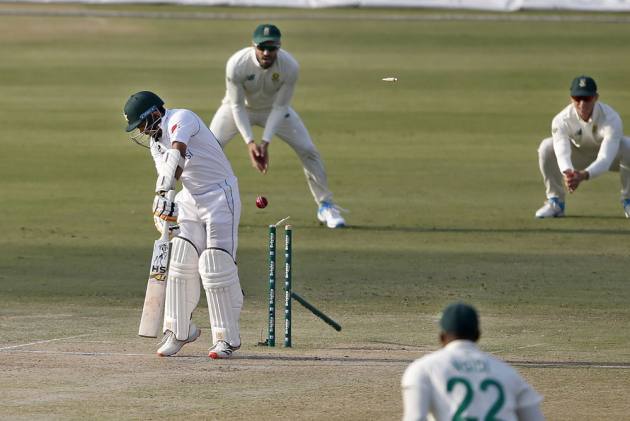 Kagiso Rabada struck twice as Pakistan made a nightmare start to their reply after bowling South Africa out on a dramatic day one of the Test series in Karachi.

The Proteas, touring Pakistan for the first time in 14 years, were dismissed for 220 after winning the toss at the National Stadium on Tuesday, Yasir Shah taking 3-54.

Dean Elgar (58) made a half-century but South Africa lost four wickets in the afternoon session and were all out not long after tea, debutant Nauman Ali and paceman Shaheen Shah Afridi finishing with two wickets apiece.

Rabada, playing his first Test for just over a year, then brought Pakistan back down to earth as he took 2-8 in six overs and they were in deep trouble on 33-4 at stumps.

Fit-again paceman Rabada removed Imran Butt for only nine on his debut and dismissed Abid Ali before Keshav Maharaj claimed the huge scalp of Babar Azam for just seven in his first innings as Test captain.

Anrich Nortje got in on the act by seeing the back of nightwatchman Afridi and Pakistan will resume on day two trailing by 187 runs.

The tourists had early been going along nicely on 63-1 until Rassie van der Dussen was run out by a combination of Babar and Mohammad Rizwan and they stumbled to 179-6 at tea, Elgar edging Nauman (2-38) to Babar at first slip after digging in for a valuable half-century.

George Linde chipped in with 35 before falling to the recalled Hasan Ali and Rabada made an unbeaten 21 before making a big impact with the ball as South Africa hit back late in the day to take the upper hand.

Proteas in a spin

Pakistan are without a win in five Tests and arrived home smarting from a 2-0 loss in New Zealand but made an encouraging start to this two-match series.

A brilliant slip catch from Butt off the bowling of Afridi accounted for Aiden Markram, but it was the spinners who did the bulk of the damage. Yasir got rid of Faf du Plessis, while Nauman – the fourth-oldest Test debutant for Pakistan aged 34 – claimed the scalps of skipper Quinton de Kock and Elgar as South Africa folded.

Rapid Rabada on brink of 200 club

Rabada came steaming in with the new ball to turn the tide, sending Abid Ali's off stump cartwheeling out of the ground before snaring Butt, who was caught at leg gully.

The paceman is now just one away from two 200 Test scalps and will come charging in again on day two with Pakistan in the mire after Maharaj trapped Babar in front and Afridi was bowled by Nortje for a duck.