Saqlain Mushtaq, who lives in UK, said he wanted to meet Rishi Kapoor and Irrfan Khan because they were good human beings 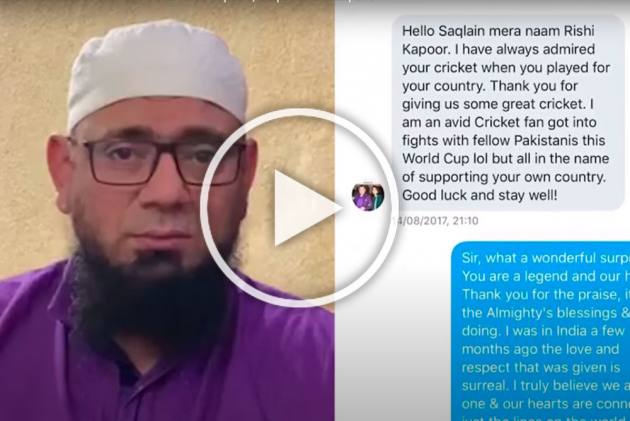 Mushtaq started the 'show' with a message, saying that death is the fact of life and the inevitable will come one day to everyone and each one will taste it.

Reliving his 'message of peace and harmony' with Rishi Kapoor on Twitter, Saqlain said that he wanted to meet the Indian actor and was ready to become his chauffeur.

Sir @chintskap your message of Peace and Harmony has touched my heart. We need more role models for humanity âÂÂÂÂÂÂÂÂÂÂÂÂÂÂðÂÂÂÂÂÂÂÂÂÂÂÂÂÂ¼ pic.twitter.com/hihypD6YTI

Talking about Khan, Mushtaq said he has been living in England for the last 18 years and knows many friends who adore and respect the Indian actor.

Irrfan passed away on Wednesday morning while Rishi Kapoor died on Thursday. Both the actors had been battling cancer.

Mushtaq, 43, had recently said that if India and Pakistan play, "there is a possibility of relations improving."

"Sachin and Shane Warne had organised All-Stars matches in America (in 2015). You won't believe I saw a flag with colours of both India and Pakistan flags. An Indian and Pakistani were holding that together.

"It brought the two nations closer. I would request the ICC to look into this. Financially also, it is a win-win for both BCCI and PCB. The series is much bigger than the Ashes," he said.