In a celebrated career, Javed Miandad played 124 Tests and 233 ODIs for Pakistan, scoring 8832 and 7381 runs respectively 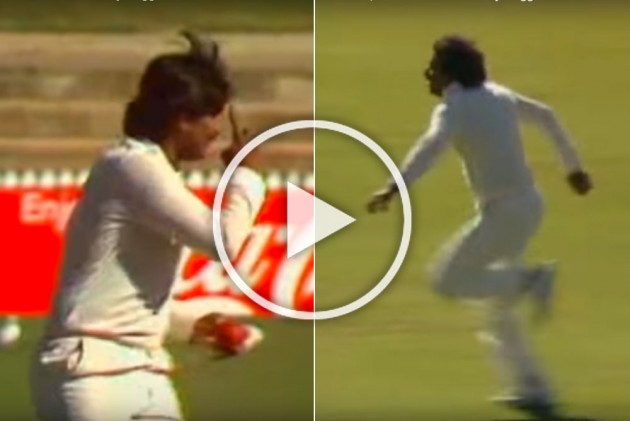 Miandad, regarded as one of the greatest batsmen, played 124 Tests and 233 ODIs for Pakistan, scoring 8832 and 7381 runs respectively.

In Tests, he bowled 1470 deliveries, taking 17 wickets with his right-arm medium pace. He also got seven ODI wickets. But the most famous moment in his not so fascinating bowling career came during a Test match against Australia in 1983/84.

Listen to Imran Khan's commentary in this YouTube video:

And here are some fan reactions, mostly hailing Miandad's confidence.

Need confidence in a life like javed bhaii âÂ¤

Javed bhai is the kind of character who dies first in any horror movie... bhai ka confidence...

Yeah , Can't even imagine Javid Bhai was that funny.

It seems like he has a dagger in his hand instead of ball. ðÂÂÂ

For the record, the 62-year-old once turned up with a sword to threaten India over the Kashmir issue.

Claiming to show solidarity with the Kashmiris, Miandad, while wearing the Pakistan cricket team's one-day jersey, is seen in the video saying if he can play with a bat and hit sixes, he can also wield a sword.

"Kashmiri brothers don't worry. We are with you. Earlier I used a bat to hit a six, now I can use this sword," Miandad said in the video while brandishing a sword.

"Balle se chakka maar sakta hu, talwar se insaan (If I can hit a sixer with a bat, can't I kill a man with a sword)," the former Pakistan captain added.