Catch highlights and Da1 scores for the second Test match between Pakistan and South Africa being played in Rawalpindi here: 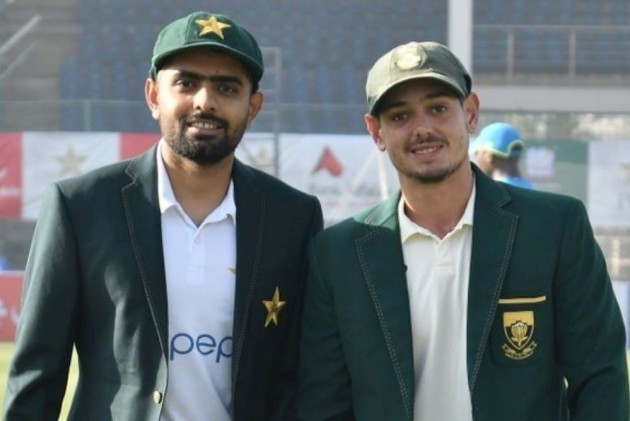 Pakistan captain Babar Azam and Fawad Alam halted a worrying start to the second Test against South Africa before rain stopped play at Rawalpindi Cricket Stadium on Thursday. Pakistan won the opening Test but lost three wickets for just one run as they were reduced to 22-3 in a promising first session for the Proteas on day one. However, like he did with a century in Karachi last week, Fawad (42no) helped get the hosts back on track by establishing a 123-run partnership with captain Babar (77no). The pair displayed some wonderful shots as they took the match to South Africa, with Babar racking up 12 fours and Fawad five but rain during tea stopped them returning on 145-3. Keshav Maharaj would have had a first-ball wicket had Temba Bavuma held on to Imran Butt (15) at first slip on 13 but he got his man courtesy of a sharp catch from wicketkeeper Quinton de Kock, making his final appearance as Test captain. Maharaj (2-51) had Azhar Ali lbw for a duck in his next over and Pakistan looked in serious trouble when Aiden Markram reacted brilliantly at short leg after Anrich Nortje's rapid delivery struck Abid Ali (6) on the thigh and zoomed towards him. However, Babar responded by getting off the mark with back-to-back boundaries and, alongside Karachi hero Fawad, steered the hosts to lunch without further loss.  Catch Day 1 highlights here: