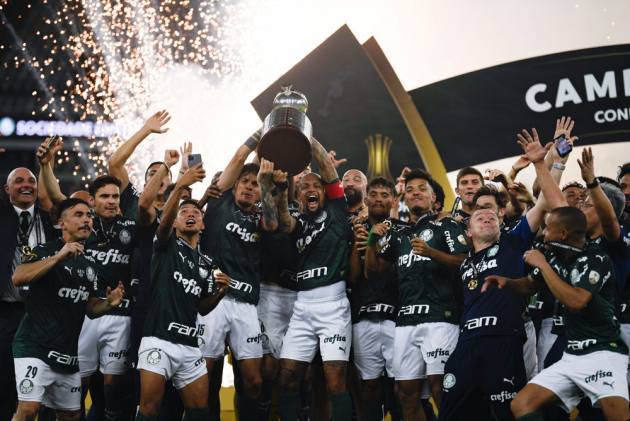 Breno Lopes scored a 99th-minute winner as Palmeiras clinched the Copa Libertadores title in a dramatic finale with a 1-0 victory over Santos at the Maracana on Saturday. (More Football News)

After a touchline fracas that saw Santos boss Cuca sent off, Breno – who replaced Gabriel Menino in the 85th minute – rose highest at the back post to nod a sensational right-wing delivery from Rony back across goal and into the far corner.

It was Rony's 13th goal involvement (five scored, eight assisted) in this season's Libertadores and it settled what had been a drab game of few chances in front of a small crowd.

Palmeiras were consequently crowned Libertadores champions for the second time in their history, with Abel Ferreira becoming just the third European coach to lead a team to glory in the competition.

Breno comes off the bench to score a late header to win the #Libertadores for #Palmeiras ! pic.twitter.com/9NRap7T5ZG

Despite a fiery start there was minimal tempo in the play of both sides, with the temperature in Rio de Janeiro over 30 degrees Celsius at kick-off.

Raphael Veiga dragged the best first-half opening wide and 14 minutes after the restart Lucas Verissimo nodded a free-kick from Marinho narrowly off target.

Veiga thundered a free-kick just over after the hour mark and Felipe Jonatan flashed a half-volley wide before Cuca was shown a red card in stoppage time for trying to stop Marcos Rocha taking a quick throw-in.

Santos were seemingly distracted by the incident and Palmeiras punished them, with Breno getting above Para – a champion with Santos in 2011 – to head home the decisive goal without the need for extra time.

What does it mean? Marathon season gets longer

The ridiculous schedule in Brazilian football has been made even tougher for Palmeiras, who now have the Club World Cup to contest as well as the two-legged Copa do Brasil final and the last six games of their Campeonato Brasileiro campaign.

Their priority will no doubt be on their trip to Qatar and a meeting with either UANL Tigres or Ulsan Hyundai, before a likely shot at European champions Bayern Munich in the final on February 11.

He only joined Palmeiras from second-tier Juventude in November, but Breno wrote his name into Palmeiras folklore despite his late introduction. He would not have been able to do that without Rony, though, who made a telling contribution despite a disappointing outing.

Only two players had created more chances in this season's Libertadores prior to the final than Yeferson Soteldo, but he struggled to get going in Rio. He did not have a single shot, provided no key passes and had the worst passing accuracy of all of Santos' starters.

- Breno's goal, scored with 98 minutes and 28 seconds on the clock, was the latest goal in regulation time in a Libertadores final, surpassing Rolando Schiavi (94:33) for Boca Juniors against Santos in 2003.
- Brazilian teams have now won 20 Libertadores titles, a tally only bettered by Argentine clubs (25). The combined triumphs of all other countries in the continent are only 16.
- Palmeiras goalkeeper Weverton only conceded six goals and had eight clean sheets in 13 games in the competition.
- Santos conceded five headed goals in this season's Libertadores – more than any other team in the tournament.

Palmeiras are scheduled to face relegation-threatened Botafogo in the Brasileirao on Tuesday, while Santos will look to boost their slim hopes of a top-six finish and a return to the Libertadores against Gremio on Wednesday.