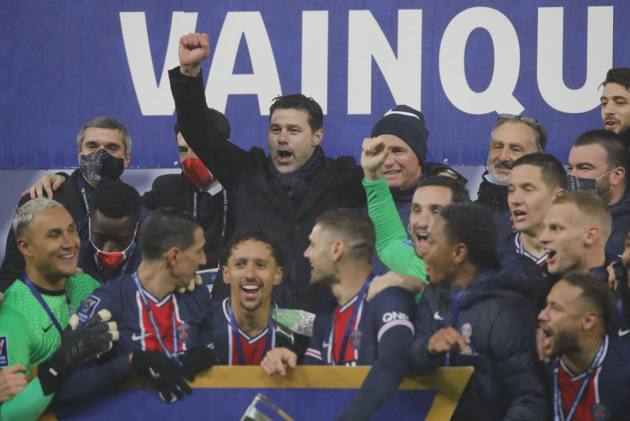 Mauricio Pochettino secured the first trophy of his managerial career as Paris Saint-Germain edged past Marseille 2-1 in the Trophee des Champions on Wednesday. (More Football News)

In just his third game in charge of the French giants, former Tottenham boss Pochettino watched his side claim the trophy for the eighth consecutive year without ever having to get out of second gear.

Mauro Icardi got them on their way, sliding in from close range after 39 minutes before Neymar, making his first appearance in a month after an ankle injury, added a second from the penalty spot five minutes from time.

Dimitri Payet pulled one back for Marseille in the 89th minute, but PSG held on to claim a deserved win.

Back in the team. Back scoring goals.

The Argentina international and Kylian Mbappe then both had efforts ruled out for offside before the half-hour mark as PSG dominated.

Icardi was not to be denied six minutes before the interval, though, tapping in from a yard after his initial header had been diverted onto the post by Steve Mandanda.

He then rounded off his action-packed first half in stoppage time, thundering a strike against the crossbar from 15 yards.

Keylor Navas denied Florian Thauvin as Marseille started the second half with a spring in their step.

Further pressure from Andre Villas-Boas' side failed to materialise, though, with substitute Neymar adding a second from the spot after Icardi had been brought down by Yohann Pele, the penalty ultimately given after referee Ruddy Buquet was encouraged to check the pitchside monitor by VAR.

Payet set up a tense finale with a cool finish from Thauvin's cross, but PSG held on to continue their Trophee des Champions dominance.

It was not exactly pretty, but Pochettino will scarcely care after getting his hands on a trophy for the first time in his 12-year coaching career.

Marseille finished the game having had four shots on target to PSG's three, although Villas-Boas can have no complaints that the best side won, with the Parisians enjoying a whopping 63.6 per cent possession and completing 268 more passes than their opponents.

Icardi's first-half goal was his fourth in just five starts so far this term. He had more shots than any other PSG player (four) and drew the foul for Neymar's late penalty.

Mbappe off the boil

Despite playing the full 90 minutes, Mbappe did not register a single shot. In a strangely subdued performance, the France international won just one of his five duels and lost possession 19 times - more than any other PSG player.

Both sides are in Ligue 1 action on Saturday, with PSG travelling to Angers and Marseille hosting Nimes.