Neymar claimed a double, but goals from Gelson Martins, Wissam Ben Yedder and Islam Slimani secured a point for Monaco 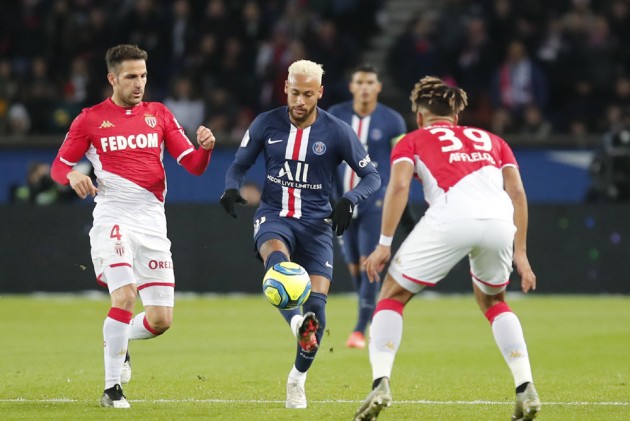 Monaco twice came from behind to claim a 3-3 draw in a Ligue 1 thriller against Paris Saint-Germain at the Parc des Princes on Sunday. (More Football News)

Gelson Martins swiftly cancelled out Neymar's early opener and Thomas Tuchel's men were behind to a fine Wissam Ben Yedder goal by the time the world's most expensive player forced a Fode Ballo-Toure own goal.

Neymar's penalty put leaders PSG ahead at the break but substitute Islam Slimani came up with a VAR-assisted leveller.

The remarkable first half burst into life inside three minutes as Neymar darted on to Marco Verratti's lofted pass to coolly finish.

Monaco refused to be cowed and Gelson slotted into an unguarded net four minutes later when Keylor Navas brought down Ben Yedder and play was allowed to continue.

Keita Balde was then booked for simulation inside the PSG area but was involved in a superb Monaco second, exchanging one-twos with Aleksandr Golovin down the left before finding Ben Yedder to brilliantly beat Juan Bernat and fire home.

Navas saved with his boot to stop Balde making it 3-1 and that moment seemingly shocked PSG back into life. Ballo-Toure turned Neymar's shot from Angel Di Maria's pass into his own net and it was all square once more.

Lecomte stood firm to thwart Neymar at close quarters nine minutes into a second half where the pace somewhat inevitably relented.

Monaco hung in the contest and snatched a disputed equaliser 20 minutes from time.

Slimani was flagged offside when he scrambled home the rebound from Gelson's shot, but replays showed Marquinhos got a touch on the ball before it ran towards the on-loan Leicester City striker.

Navas tipped over to deny Slimani an unlikely winner before Neymar's sumptuous chipped pass in stoppage time gave Mbappe the chance to claim an outright club record of scoring in an 11th consecutive PSG match, but the striker sliced wide.

What does it mean? PSG's chin tested after Robert's Monaco came out swinging

PSG dropped points for only the fourth time this season, leaving them five points ahead of Marseille at the summit with a game in hand. This high-class encounter should do them little harm as attentions begin to turn back towards the Champions League, while Monaco are in the hunt for a return to European football and look to have some of their old swagger back under Robert Moreno.

Injuries and the saga over his long-term club future have provided a less-than-ideal backdrop to Neymar's third season in Paris. But he has now scored in each of his past seven matches in all competitions – a run dating back to December 4. The Brazil star was unplayable at times and the sight of him charging back to his own box to break up a Monaco counter-attack with an hour played heartened the Parc des Princes faithful.

Verratti fails to stem the tide

Italy international Verratti showed his undoubted quality with the pass for Neymar's opener but his other role in Tuchel's expansive attacking line-up is to help protect the back four. Too often, he came up woefully short in this department against a vibrant Monaco, not least when Gelson's deft spin left him on the turf in the build-up to Slimani's equaliser.

These two sides will do it all again in their rescheduled Stade Louis II clash on Wednesday. Sunday's evidence in Paris certainly suggested it will not be one to miss.