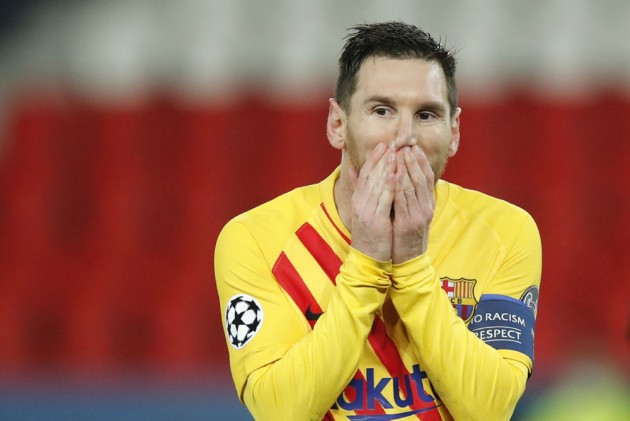 The Catalans prematurely exited the Champions League 5-2 on aggregate to Paris Saint-Germain after a second-leg 1-1 draw in the French capital.

Pedri admitted Barca's 4-1 first-leg defeat left them with plenty to do in Paris but argued they had the better chances.

Messi cancelled out Kylian Mbappe's penalty opener before the Argentinian had a spot-kick saved by Keylor Navas on the stroke of half-time which could have given Barca the momentum to kick on in the second half.

Messi's miss was his first failed penalty attempt in the Champions League since February 2015, having scored his previous eight spot-kicks.

"We knew it'd be vital to take our chances," Pedri said post-game. "We produced a really good game but we missed big chances.

2015 - Lionel Messi has failed to score a penalty attempt in the UEFA Champions League for the first time since February 2015 against Manchester City, having scored each of his previous eight spot kicks in the competition before today. Uncharacteristic. pic.twitter.com/UzeS1hFFkM

"We believed we could produce another big fightback and qualify but the penalty just before half-time was a big blow to miss.

"We kept on fighting and you can't define a result or a game looking just at a missed penalty. We had many chances and didn't take them."

Barcelona had 21 shots compared to PSG's seven, including 10 on target, while they had 73 per cent possession.

Forward Antoine Griezmann agreed that profligacy in front of goal cost the Catalans.

"It's a real shame, I'd say there were four clear-cut opportunities plus the penalty," Griezmann said.

"If you don't put them away, it's harder later in the game. Nevertheless, it was a completely different contest to the first leg."

13 - Barcelona have failed to reach the UEFA Champions League quarter-finals for the first time since 2006-07; they were on a run of 13 consecutive quarter-final appearances, the longest such run in the competition’s history. Eliminated. pic.twitter.com/gqirxtHIFW

Barca's failure to reach the Champions League quarter-finals was their first since 2006-07; having been on the longest-run in the competition's history of 13 consecutive last-eight appearances.

France international Griezmann vowed they would return in 2021-22 to challenge for the European crown.

"It's time to keep our heads up and feel confidence because of how we played," he said.

"We need to keep improving for the season to come. We are hacked off because we were desperate to go through. I don't think we deserved to go out this early but next year we'll try to win this competition."