On November 19, 1969, Brazilian superstar Pele scored the 1,000th goal of his career. Fifty years later, it remains a superhuman feat 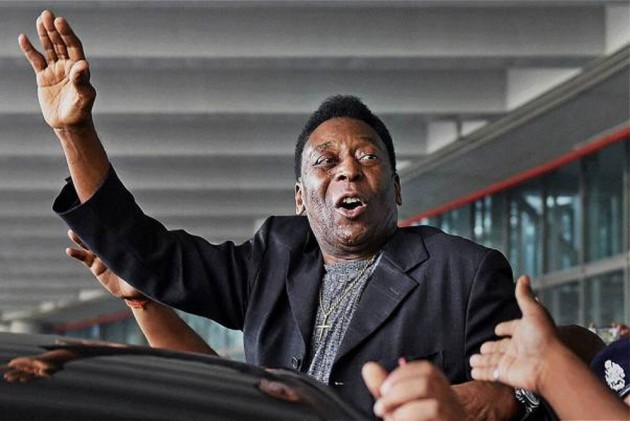 It was the year of Easy Rider, Butch Cassidy and the Sundance Kid, Midnight Cowboy, Kes and The Italian Job; Abbey Road, Let It Bleed, Dusty In Memphis and Kick Out The Jams. (More Football News)

Woodstock was a totemic cultural moment in 1969 - but so too the first flight of the Boeing 747, the wedding and bed-in of John Lennon and Yoko Ono, the Stonewall riots and the first manned Moon landing, Neil Armstrong and all that jazz. And jazz. Miles Davis’ classic In A Silent Way split critics down the middle.

There was Monty Python's television debut but also the Manson Family murders and the ongoing Vietnam War. The US magazine Life revealed at least 12 million Americans had experimented with marijuana.

All very adult, magic meets toxic; spaceman versus off your face, man.

Little wonder then, that when Pele scored his 1,000th career goal on November 19 of that year he begged the world to please think of the children. The babes of US boomers may have been treated to the very first broadcast of Scooby Doo on CBS in September, but Pele knew the kids in Brazil were still being sold short as the end of the decade drew near.

"For the love of God, people," the 29-year-old Pele said in Rio de Janeiro, on that historic night. "Now that everyone is listening, help the children, help the helpless. That's my only wish at this very special time for me."

Like a fusty Sunday school teacher, Pele was a laugh all right.

Pele has used his platform in the 50 years since slotting a penalty past goalkeeper Edgardo Andrada at the Maracana stadium to plead the case of many others in need: from the impotent to the gluttonous. Those Viagra and Subway ads never grow old, the image of Robbie Fowler and Steve McManaman flanking Pele behind the counter of a London sandwich shop perhaps as evocative of a time and a place as Jairzinho and Tostao keeping the great man company in Mexico City.

And there ends the coating down of sporting royalty, for this week marks the 50th anniversary of Pele's "milesimo" moment, when his goal haul took the 12-yard leap from three figures to four.

FOOTBALL FROM ANOTHER PLANET

Grainy black-and-white footage that might as well have come from Mars shows Pele slotting a 78th-minute penalty for Santos against Vasco da Gama, hacked down before picking out the bottom-right corner to earn a 2-1 win for the visitors.

It shows Pele being mobbed within seconds, hoisted onto the shoulders of hyped-up supporters and carted around the pitch.

Just hours earlier, a second band of Americans had landed on the Moon, with Apollo 12 astronaut Pete Conrad striding out and announcing himself as a lunar-level troll with the immortal line: "Whoopie! Man, that may have been a small one for Neil, but that's a long one for me."

With Pele, legacy lies within his deeds rather than his words. Unlike Muhammad Ali, his peer and perhaps the only sportsman whose legend matches his own, Pele never presented a poetic strand to his personality.

Any list of Ali's great quotes would be a hoot. With Pele … well, there's not so much to pick at. He once surmised that Nicky Butt was the outstanding player at the 2002 World Cup, which might actually be an underrated comedic line.

But if Pele's personality has proven rather one-dimensional, on the football pitch he spent the years from 1956 to 1969 racking up the goals to hurtle from one to one thousand.

Hundreds came in the Brazilian league, scores came in a Brazil shirt, and many more came in tour matches with Santos. Those are the discredited goals. The ones that should not count. The goals that came too easily. The gifts. The goals anyone could have scored. The strikes that earned Santos silverware as illustrious as the Torneio Dr Mario Echandi, the Torneio Hexagonal do Chile, the Torneio Pentagonal do Mexico and the Torneio Triangular de Florenca. If your tournament was promoted in geometrical terms, history shows Pele and Santos were game.

So the 1,000 goals supposedly fell into his lap. Except of course, Pele was the only player of his era to reach that mark.

His eventual career tally of 1,281 goals in 1,365 games - by Santos' totting up - has come to be judged with the same scepticism as, well, the moon landings. Pele and Santos are portrayed in some quarters almost as scammers, making the unfeasible feasible by tackling supposed sham opposition.

Remember when totting up career goal tallies that Ronaldo played and scored against Luxembourg on Sunday. Seven of his 99 goals for Portugal have come against Lithuania, five against each of Andorra, Armenia, Latvia and - them again - Luxembourg. He has hit four goals against the Faroe Islands. As cheap goals come, those are Torneio de Freebie level.

Messi has been cut loose six times against Arsenal's defence, for goodness sake, and of course he is going to score nine goals playing at that level.

Pele could sniff a cheap goal, but so too can these two.

I would like to offer my congratulations to you, Lionel Messi, on your 600th goal. What a way to score it. Fabulous. // Gostaria de oferecer meus parabéns a você, Lionel Messi, pelo seu gol número 600. E que maneira de atingir essa marca. Sensacional. @TeamMessi https://t.co/VH5u7U4d8H

Those who scoff at Pele never finishing as top scorer in a World Cup, questioning why he failed to match Just Fontaine in 1958 or Gerd Muller in 1970, rarely posit Pele's 12 goals (in 14 games) against Ronaldo's seven or Messi's six.

Pele deniers - who lamentably exist and presumably exist lamentably - challenge his credibility as a 1962 World Cup winner because he was injured in Brazil’s second game and missed the rest of the tournament. It almost needs a Greta Thunberg to stand up and question the motivations of such malevolent trash-talkers.

NOT THE TREMBLING KIND

Gradually, the witnesses to Pele's greatness are dying out. Gordon Banks, England's number one who produced the stunning save from that famous header at the 1970 World Cup, passed away in February, and Andrada, the man beaten from the spot for that landmark goal, joined the celestial goalkeepers' union in September.

Speaking about confronting Andrada on that famous November night in Rio, Pele said he had "trembled for the first time" in his career before planting the ball into the back of the net.

On November 20, 1969, Rio's O Globo newspaper gave the Moon landing and Pele's feat equal billing, with headlines of 'The Moon' and 'The Goal' decorating its front page.

Newspapers across the globe carried the story of Pele's feat, flagrantly refusing to bow to future mistrust of the deed's integrity.

The Daily Mirror quoted England captain Bobby Moore, describing Pele's achievement as "a fantastic record" and expressing the hope he would not net against the Three Lions at the following year's World Cup.

As it happened, Moore, Banks and co kept Pele out when the nation that gave the world the beautiful game faced the team that perfected it: a goal from Jairzinho separated the teams in Guadalajara.

READY TO BOW OUT

Half a century on from the "milesimo", Pele explained in an interview with Brazil's Estadao newspaper last week how he is recovering from back surgery. He also thanked well-wishers after he was recently hospitalised with a urinary tract infection, and suggested he would retire from public life after the 2022 World Cup.

He was offered a chance to speak out on racism in football and gave a flaccid response, seemingly having more to say about political divisions in Brazil, albeit without explicitly taking a side.

Pele turns 80 next year. He continues to be chided by generations that never saw him play, taunted by snide columnists: 'Top 5 Things Pele Does Not Want You To Know' was one recent word-chunder; another was labelled 'Why Pele Is The Most Overrated Player Of All Time'.

When Jason Cundy, a sunbed-scorched ex-Chelsea pro turned media arriviste, recently described Pele as "overrated" and "nowhere near the level of Ronaldo or Messi", it was arguably time to summon the PR heavies.

Believe those who were there. Believe the euphoric reports from the day Pele got that 1,000th goal. Believe a nation that still calls Pele 'King' - and will remember him that way in another 50 years from now. Just this once, believe the boomers.