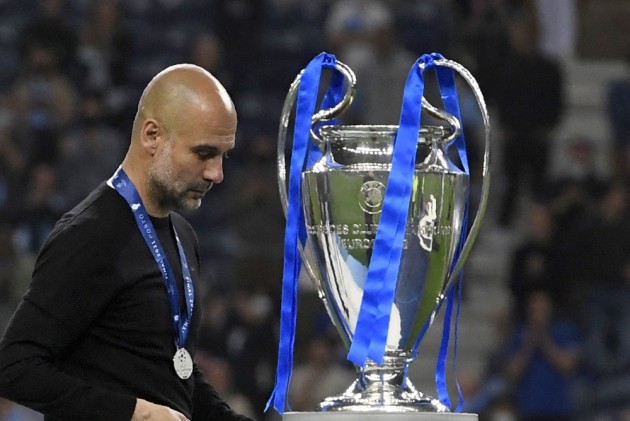 Pep Guardiola insisted he "did the selection best to win the game" after Manchester City slumped to a 1-0 Champions League defeat against Chelsea in Porto. (More Football News)

Premier League champions City lacked their usual fluency and mustered a solitary shot on target over the course of the contest, despite sending record goalscorer Sergio Aguero on for a farewell appearance late on.

Guardiola sprung a selectorial surprise before kick-off by omitting Fernandinho and Rodri and starting with Ilkay Gundogan at the base of his midfield.

The ploy backfired as City struggled for control throughout the match, especially in the first half, but Guardiola insisted his process was the same as the one that preceded this season's triumphs over Borussia Dortmund and Paris Saint-Germain, along with last year's similarly dispiriting quarter-final reverse against Lyon.

"I did my best in the selection. Like last season against Olympique Lyon, like it was against PSG and Dortmund," the City manager told a post-match new conference.

1 - Pep Guardiola has lost his first cup final as Manchester City manager, with this loss only the second major cup final defeat of his managerial career (after the Copa del Rey in 2010-11). Unfamiliar. #UCLFinal pic.twitter.com/QFmbyoCtRi

"I did the selection best to win the game, the players know it. I think Gundogan played good, was exceptional. We missed a little but in the first half to break the lines. In the second half it was much better.

"It was a tight game. We had enormous almost chances.

"Against Chelsea it's not easy but it wasn't for them either. They had the goal and Werner's shot in the first half and Pulisic in the second half.

"We struggled a little bit for the long balls, they used the second balls and after they run.

"In that moment, you need inspiration and quality. There were three or four moments with crosses from the byline but we did not arrive."

In City's 61 matches across all competitions in 2020-21, this was only the second time neither Rodri or Fernandinho featured in a starting line-up.

Explaining his rationale, Guardiola said he hoped Gundogan would quicken the tempo of City's play.

The Germany international completed an impressive 76 of his 80 passes (95 per cent) but the club's top scorer this season was unable to have a decisive influence as he created a solitary chance and did not attempt a single shot.

"I decided a decision to have quality players," Guardiola said.

"Gundogan played many years in this position, to have speed on the ball, find the small players, the brilliant players in between the lines and this was the decision."

Chelsea boss Thomas Tuchel conceded Guardiola's gambit had led to some raised eyebrows in his camp.

3 - Thomas Tuchel is just the second manager to record three consecutive wins in all competitions against Pep Guardiola (excl. Barcelona B), after fellow German Jürgen Klopp did so in 2018 with Liverpool. Masterminds. #UCLFinal pic.twitter.com/s8T4xVuGnv

"I expected Fernandinho to start," he said. "He chose a very offensive line-up, a very technical line-up, it was very hard to steal the balls and recover the balls.

"Everything else we more or less expected. We expected them to try and pin us on the sides very wide, so it was very important that we stepped out with Toni [Antonio Rudiger] and Azpi [Cesar Azpilicueta] to support our midfield.

"It was important to stay in a block in the front five to avoid diagonal switches of play for the number 10s. We had to play with a strong bond and a genuine belief and this is what we did."

City's cause was not helped by Kevin De Bruyne departing with a nasty-looking head injury following a collision with Rudiger before the hour, for which the Chelsea defender was booked.

"I don't know about the pain he has in his face, I didn't see him or speak to the doctor because I came to speak with all of you, Hopefully it will not be a big problem," said Guardiola, who was also keen to flag the achievements overall of a campaign where City won a third top-flight title in four years and a fourth consecutive EFL Cup.

"I would like to say it was an exceptional, exceptional season for us. It is a dream being here, unfortunately we could not win," he added.

"We tried, we could not do it and we will work to come back one day."