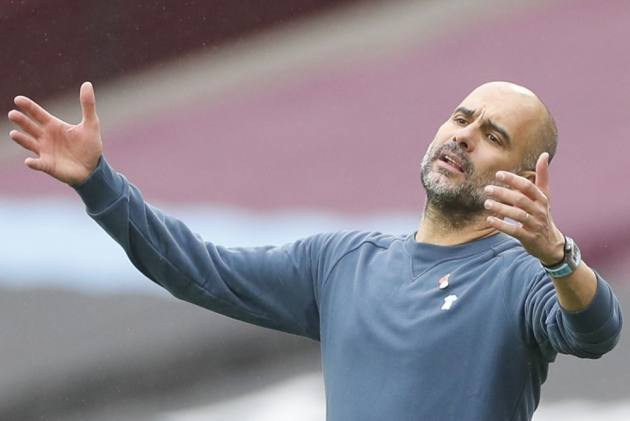 Pep Guardiola offered his sympathy to sacked Chelsea head coach Frank Lampard but recognised managers have to win to keep their jobs in the Premier League. (More Football News)

Blues playing great Lampard was dismissed on Monday following a run of just two victories in eight league matches, leaving Chelsea in ninth and 11 points off the top.

A club statement described "a very difficult decision", but owner Roman Abramovich is now set to turn to Thomas Tuchel, who was fired by Paris Saint-Germain last month.

Lampard averaged an underwhelming 1.67 points per game during his tenure and Manchester City counterpart Guardiola knows more is expected.

"Young and old managers, here you have to win," Guardiola said. "When the people talk about projects and ideas, they don't exist. You have to win; if not, you will be sacked.

"Respect for Chelsea, huge hug for Frank. Hopefully I can see him soon; when the lockdown will be over, I can go to a restaurant to see him again."

Asked for his assessment of Lampard's work, Guardiola reiterated: "It depends on the results.

"The way we play, the philosophy, the project... you have to get results. If you don't, you will be replaced by another manager."

But the City boss does wish coaches were given more time - from the media as well as clubs.

"All the managers, we need this," he said. "I'm not judging the decision from Chelsea ,I am not there. Respect in every decision, it has to be this way.

"We try to win as much as possible, but it doesn't happen if you don't have the directors, the board, the owners and CEOs in the same line and you know exactly what the target is.

"Every manager needs time to do what you believe or make the players feel that it doesn't matter what happens, we believe in this, in this idea.

"And that is exceptional; it only happens in a few places around the world because the board, owners, CEOs want results immediately, quick, quick, quick.

"It's difficult to talk about the projects in years, because in one month you can drop everything you built. The opponents also have good players, managers, too; you are always at risk to be out."

Guardiola finds himself in a relatively comfortable position at City, though, after a run of 10 straight victories in all competitions eased early-season pressure.

West Brom, up next on Tuesday, were the last team to stop City winning, but Guardiola is not interested in reflecting on how they turned their season around following that 1-1 draw.

"It's difficult to say," he said. "We won the next game in Southampton, one of the turning points. In that moment, Southampton were in incredible form.

"The process was we start to play better, more confident. We saw we were far away from the top of the league, then we get closer, the team eats better, trains better, we get results, successive wins.

"I know always you ask me about the past; what happened happened. I'm not a big fan of this. The next one is always important, like we have done in recent weeks."

Indeed, if City win the next one they will top the table for the first time this season - the ninth different team to reach the summit this term - with rivals Manchester United not in action until Wednesday.

"The leader is United - they are top of the league," Guardiola said. "We'll have all the games, the same games all together, we will see.

"But now we aren't top of the league. The distance is so narrow, but I don't see the table much; I didn't watch it when we were 12th, now it's the same. My focus after Cheltenham is West Bromwich."