Pep Guardiola made several tactical tweaks in Man City's win over Real Madrid, though subsequently shrugged off praise for his management 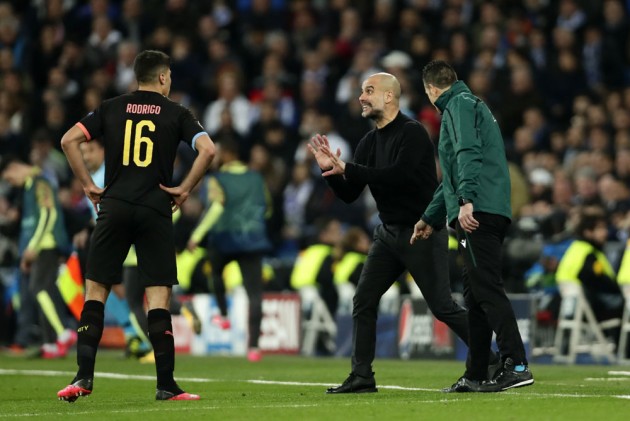 Pep Guardiola joked Manchester City's tactics would not be getting praised if they had not won after his side came from behind to beat Real Madrid in the Champions League. (More Football News)

City had the better of a fast-paced first leg at the Santiago Bernabeu on Wednesday, yet Isco's opener on the hour looked set to be handing Madrid the advantage in their last-16 tie.

However, a tactical tweak from Guardiola – who started Kevin De Bruyne in an advanced role and Gabriel Jesus on the left – saw Raheem Sterling enter the fray and spark a late revival.

Sterling's introduction gave De Bruyne license to roam, with the playmaker setting up Jesus' equaliser before the Belgian slotted in a winning penalty with seven minutes remaining.

Sergio Ramos saw red for Madrid as their capitulation worsened, with City holding firm to take a lead back to Manchester for the second leg on March 17.

"Only because we won, it doesn't count if not," Guardiola told BT Sport when asked if it was a perfect gameplan.

"The important thing is the way we played. We came here to win the game and we did it in this stadium, it's just the first part.

"If one team can overcome this situation, it will be [Real Madrid]. Of course, it's a good result.

"I am so proud, but it is just the first part. We have another game, so it is not over. It will be so hard. But be calm, enjoy the moment.

"On Sunday we have [the EFL Cup] final and then keep going in the Premier League and prepare the second game against Madrid."

2 - Manchester City are just the second side to beat Real Madrid away from home in the Champions League despite conceding the first goal, after Milan in October 2009. Belief. pic.twitter.com/rN8tRtvnM0

City missed several chances prior to Isco's opener, which came from a mix-up between Nicolas Otamendi and Rodri, while Kyle Walker also failed to cover himself in glory, and Guardiola acknowledged his team are still prone to too many lapses.

"We were the better side and we conceded a goal that we should not have conceded and then, when Madrid were better, we scored. But that is competition, that is football," he added.

"I remember two seasons ago in the quarter-finals at Anfield we played incredibly well, but [Liverpool] had three shots on target and scored three goals.

"Against Tottenham [last season] we showed incredible personality as well, but we have to improve, we cannot gift them the goal we conceded, but it's part of the game and in the future we will grow."

De Bruyne's winner was his 50th goal in all competitions for City, and the 28-year-old said he and his team-mates are now getting used to Guardiola's tactical tinkering.

"I think in the four years [under Pep] there has always been surprises," De Bruyne told BT Sport.

"We don't sometimes really know until the game starts what we need to do. Some moments were good, we had some lesser moments but in a quality game like this you're going to struggle sometimes, but we fought really well together."