Pep Guardiola Has 'Never Seen A Player' Like David Silva 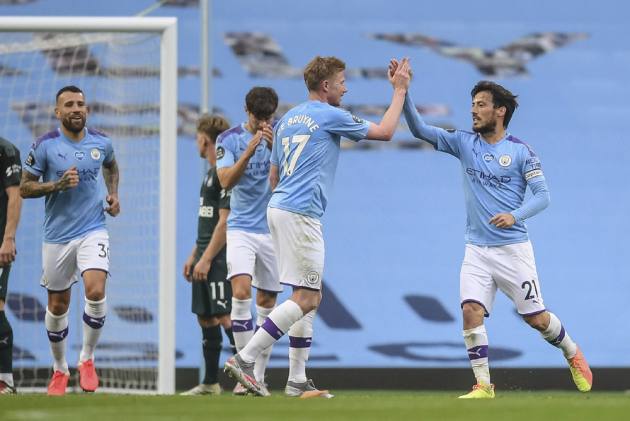 Silva set up goals for Gabriel Jesus and Raheem Sterling and scored a fine free-kick as City made light work of Steve Bruce's men in Wednesday's Premier League clash.

The Spain playmaker now has 121 assists in his City career and has reached 10 in all competitions in each of his 10 seasons with the club.

Silva will have just two more home league games before leaving City at the end of the season, with his farewell dampened by the fact supporters cannot attend games due to the coronavirus pandemic.

Manager Guardiola still expects a packed house for Silva's planned testimonial, though, as he believes the 34-year-old is a player unlike any other.

"The level he is having I think is the best of this season," Guardiola told BT Sport. "He's playing really, really good. Okay, the fans are not here, but he's coming back to make the farewell game in front of the fans.

"He's an incredible legend. He's a huge competitor. In small spaces, in the pockets, I never saw a player like him."

1+1 - David Silva (34) is the first player aged 34 or older to both score and assist in a Premier League game since Zlatan Ibrahimovic (35) for Manchester United against Sunderland in April 2017. Twilight. pic.twitter.com/s99NiSiDr6

City's resounding win came after their shock 1-0 loss to Southampton, their ninth in the league this season.

Guardiola was happy with his side's clinical edge given he felt they created better chances in the defeat at St Mary's Stadium, with his main focus now on the coming FA Cup semi-final with Arsenal and the Champions League last-16 second leg against Real Madrid in August.

"We played good, the same level of the last game," he said. "It was a good performance and today we scored the goals that we missed in the last game.

"We created more chances in the game against Southampton but we could not convert. We are preparing for the games against Arsenal and Madrid.

"Everyone wants to play. I try to let them play as much as possible all the time. They deserve it. I don't just want to select 11 players. We try to convince them that all of us are going to achieve what's ahead this season."