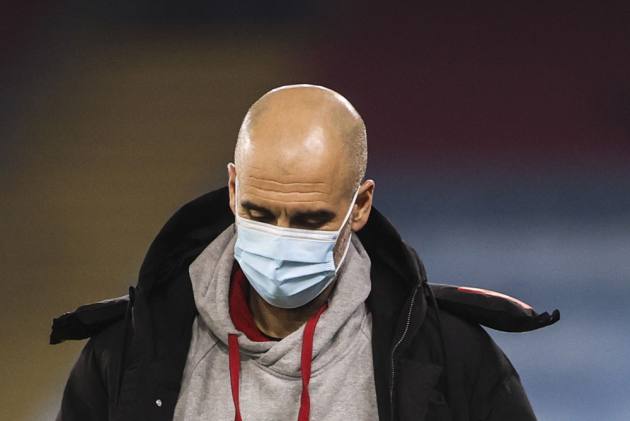 Pep Guardiola has admitted Manchester City have a worrying pitch problem as they attempt to land an unprecedented quadruple this season. (More Football News)

The City manager has been impressed by playing surfaces at stadiums his team have visited recently, pointing to Arsenal, Liverpool and Manchester United as clubs who have pristine grass.

However, the boss of the Premier League leaders says his team are playing on a pitch that is ill-suited to players of their prowess, and he wants a solution to be found.

Guardiola revealed his turf torment when assessing that the pitch at Fulham's Craven Cottage, where City play on Saturday, is also not one of the best around.

"I know the stadium is always difficult, the grass is not in good condition, quite similar to our grass that is not good," Guardiola said.

When asked how much of a problem it was to City that their Etihad Stadium conditions were not ideal, Guardiola replied: "A lot. They're working a lot trying to find a solution, but the grass is not good.

"All the players know how good the grass is and sometimes is not. I know the weather conditions here are tough, but there are stadiums where the grass is good. We were in London against Arsenal, we were in Anfield and Old Trafford and the grass was better.

"We were in Budapest in the Champions League and the grass was a red carpet, it was amazing, but the grass here is not good."

Such an inconvenience did not prevent City recently running up a 28-game unbeaten streak, which ended on home soil against United last weekend.

With the end of City's unbeaten run coming so recently, Fulham may fancy causing a shock on Saturday evening, despite losing their past six games against City across all competitions by an 18-0 aggregate.

City have lost just one of their 13 Premier League away games against Fulham (W7 D5), going down 2-1 in November 2005 under Stuart Pearce.

Guardiola spoke passionately about Fulham's qualities, and he ranks Cottagers boss Scott Parker highly in the group of forward-thinking young managers who are emerging across Europe.

On the style front, Guardiola admits he will struggle to compete against the sharply dressed Parker, saying: "He's younger, he has hair, he's better than me, definitely. I accept a draw against him."

On the pitch, however that pitch may look under his close scrutiny, Guardiola will not want to settle for a point in west London.

He namechecked Brighton's Graham Potter - "Mr Potter" - as another bright young coach, and said he admired young managers who compelled their teams to play football with bravado, even if results are slow in coming.

"They are the ones I admire the most," Guardiola said. "They're doing this in the beginning and it's not going well, they continue to do it and in the end the results come.

"Just take a look in Spain, Germany, Italy. All the new managers, they play like they are managers of Bayern Munich. So go forward and try to do it. Sometimes they can do it."