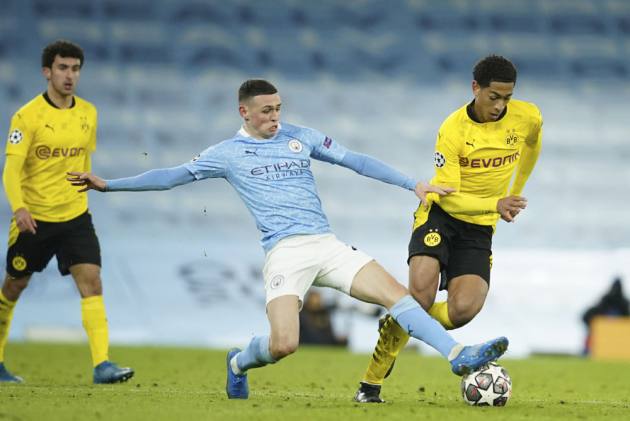 Pep Guardiola's Premier League champions elect are back at a bloodthirsty Anfield and Mohamed Salah already has the Reds in front, so why not have a go?

Oxlade-Chamberlain larrups it beyond Ederson and before the half hour Sadio Mane has made it 3-0.

There would be no way back for City, who would finish the Premier League season 25 points better off than Liverpool, as they threw caution to the wind in the second leg but lost 2-1.

Guardiola talked himself into a half-time red card when Leroy Sane had a goal incorrectly ruled out for offside before UEFA were using VAR. The competition the Catalan threatened to make his own at the start of the decade had already become a nagging irritation.

After losing three consecutive semi-finals at Bayern Munich, not to mention two out of four on the occasions his Barcelona didn't win it under his leadership, Guardiola is wary of a pressure-cooker Champions League night.

Embroiled in a titanic title battle with Liverpool, he rests Sane and Kevin De Bruyne and picks an unusually cautious line-up. Nevertheless, VAR intervenes to award them a dubious penalty against Tottenham, granting Sergio Aguero a punt at a priceless away goal.

At the Etihad, all hell breaks loose as the sides trade goals and Aguero puts City 4-2 ahead on the night to lead the tie for the first time. Then Fernando Llorente bundles home and survives a VAR examination for handball. Raheem Sterling has a stoppage-time winner ruled out because replays show Aguero's heel to be offside in the build-up.

Guardiola crumples to his knees. City are out on away goals to a team that would finish 27 points behind them in the Premier League.

No away goals to bother City this time, as the pandemic-delayed final stages of the Champions League take place as one-off matches in Lisbon.

After seeing off 13-time European champions Real Madrid, Guardiola has to reckon with Lyon – a team who finished seventh in Ligue 1 in 2019-20.

However, one point from two games against the same opponent in the previous season's group stage spooks the City boss into a rarely used 5-3-2.

They fall behind to a Maxwel Cornet goal, their attack disjointed. De Bruyne, who appears to be fighting a lone hand, equalises but Gabriel Jesus and Sterling miss glorious chances and Ederson is culpable as Moussa Dembele's brace ensures City's biggest European humiliation to date.

Phil Foden, so impressive in the second leg against Madrid, looks on as an unused substitute.

Jude Bellingham's slick footwork and cool 15th-minute finish at Signal Iduna Park is the sort of thing City players do quite a lot but not on these occasions.

Here's the fear, it's happening again. Everyone just stay calm… no, Kyle Walker, don't shoot from all the way over there in Gelsenkirchen.

De Bruyne is in no mood for stage fright to kick in and tears at Dortmund, rattling the crossbar. Ruben Dias, unscarred by City's previous failures, is colossal in neutering Erling Haaland. Still, at half-time they are going out.

The big occasions do strange things to even the most seasoned performers, but Emre Can deciding to break out an elephant impression while heading a cross clear is a new one.

Oh God, a penalty. City don't tend to be great at these, as Aguero showed at Tottenham.

Up steps Riyad Mahrez. Remember the Anfield loss? Well, the next time Guardiola's men visited the red side of Stanley Park, the Algeria winger put one into orbit from 12 yards.

Not this time. Having fought long and hard to become one of his manager's go-to attackers, Mahrez emphatically clatters home.

2 - Phil Foden is only the second player aged younger than 21 to score in both legs of a UEFA Champions League quarter-final tie, after Kylian Mbappe in 2016/17 for Monaco against Borussia Dortmund (18). Phenom. pic.twitter.com/PLCL5yxUH2

Nerves are dissipating but have never been a problem for Foden. They never are, as he showed with the winner after Dortmund equalised in Manchester last week. He and Bellingham might have a very exciting future together in their national team.

The boyhood City fan draws back his left boot to send home the decisive blow and makes a beeline for Guardiola in the dugout, grabbing his boss' head. It feels like an exorcism.

After sharing a post-match chat with the man of the moment, Haaland now towers in Foden's rear-view mirror. PSG and Kylian Mbappe are up next. Foden arguably belongs in their conversation, as an individual good enough to dominate for a decade.

Of course, such dominance is easier forecast than achieved. Guardiola's quarter-final problem is no more. Now, how is his Champions League semi-finals record?