Aided by an excellent performance from Naveen, who ended up with 14 points, the Haryana Steelers came out top of their rivals, Puneri Paltan at the 2019 Pro Kabaddi Season 7 (PKL 2019). Meanwhile, Jaipur Pink Panthers defeated U Mumba, 42,23. 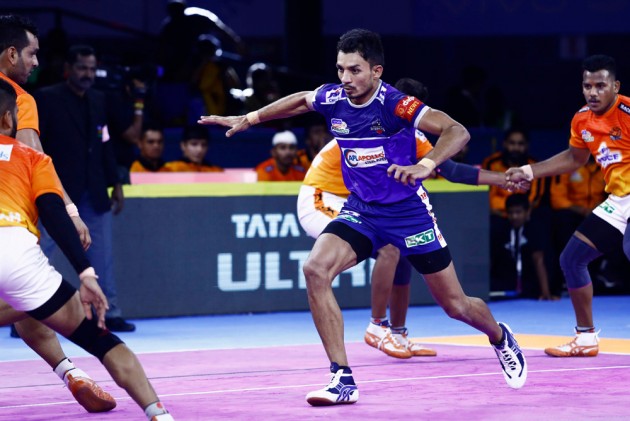 Aided by excellent performance from Naveen, who ended up with 14 points, the Steelers came out top of their rivals.

Puneri Paltan put up a spirited performance but when it came to crucial moments, it was Haryana Steelers that came out on top.

There was very little to choose between both teams, but Haryana showed immense mental strength to overcome their rivals.

Pawan Kadian got a super 10 for Puneri Paltan but his effort went in vain.

It was a special match Monday as two of India's finest players -- Anup Kumar and Rakesh Kumar -- were pitted against each other.

Anup is now the coach of Puneri Paltan while Haryana Steelers are being coached by his long-time teammate Rakesh Kumar.

Puneri Paltan made a strong start as Pawan Kadian made a two-point raid to give them a 3-0 lead in the first few minutes of the match.

Haryana came back strongly to inch slightly ahead in the first five minutes. It was an evenly-matched contest in the first 10 minutes, but Haryana Steelers shifted gears soon thereafter.

First, it was Naveen who picked up a few raid points to help Haryana Steelers inflict an all-out as they led 11-6 after 12 minutes.

Puneri Paltan suffered another all out in the 15th minute to trail 8-20.

At the end of the first half, Haryana Steelers were the dominant force and held a 12-point advantage to lead 22-10.

Puneri Paltan's Amit Kumar displayed a lot of courage as he continued his fine performance on the mat despite his head being bandaged.

The second half saw Haryana Steelers playing with great composure. The Steelers paced their raids smartly and didn't give Puneri Paltan any to make a comeback.

Naveen continued to pick up raid points at regular intervals. For Puneri Paltan, it was Pawan Kadian who chipped in with raid points but didn't get enough support from his teammates.

With less than five minutes to go, Haryana Steelers led 30-20 and were on course to a comfortable victory.

Puneri Paltan made a few efforts to mount a comeback but Haryana Steelers had the mental strength and didn't crumble under any pressure.

Jaipur's raiders were in fine form and picked up points at regular intervals, whereas their defence showed strength and toughness to contain U Mumba raiders.

Deepak Hooda finished with a super 10, while Deepak Narwal (6 points) and Nitin Rawal (7 points) also chipped in with crucial points. Besides Amit Hooda did a fine job in defence.

For U Mumba, it was their defence that let them down as they scored just five tackle points on the night.

Deepak got Jaipur off to a flying start as he got three points in two raids.

U Mumba were caught off guard with Jaipur's quick start and suffered an all out in the seventh minute to trail 2-10.

Jaipur raiders got the better of U Mumba's defence and scored raid points at will throughout the first half.

Fazel Sultan Attrachali had an off day by his high standards and scored just two tackle points.

It was a more evenly-matched contest in the second half as U Mumba got their act together.

In the first 10 minutes of the second half both the teams exchanged five points each with Jaipur leading 27-15.

Dong Geon Lee put in a spirited performance for U Mumba and along with Abhishek Singh was the main contributor.

In the last five minutes of the match, it was Deepak show as he picked up raid points at regular intervals to record his first super 10 of the season.