Tiger Woods was bedridden completely for three months after he shattered bones in his right leg, ankle and foot when the SUV he was driving crashed through a median and down a hill in Los Angeles. 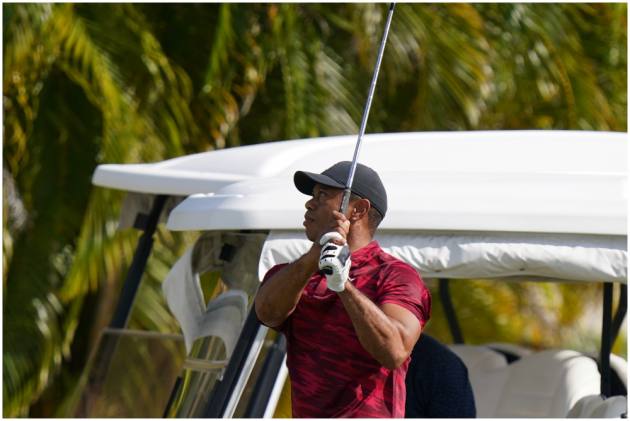 The father of Justin Thomas got the first look at Tiger Woods playing a round of golf since his car crash 10 months ago and saw more than he expected. “It's crazy how good he’s hitting — and far he’s hitting — for what he’s been through,” Mike Thomas said Thursday at the PNC Championship. (More Sports News)

“It's impressive where he's at.” Next up for Woods is playing in front of an audience. It's one thing for the 15-time major champion to play with 12-year-old son Charlie, with Mike Thomas along for the ride, last week near his home in south Florida. It's another to tee it up in front of thousands of spectators and on network TV.

Only 10 months ago, Woods shattered bones in his right leg, ankle and foot when the SUV he was driving along a winding suburban road in Los Angeles crashed through a median and down a hill.

Woods was immobilized for three months in a makeshift hospital bed in his house.
He went from crutches to slowly walking. He was hitting balls on the back end of the range at Albany during his Hero World Challenge two weeks ago in the Bahamas.

And while the PNC Championship — 20 teams of parents and children, one of them a major champion or Players Championship winner — is a family affair, the score counts. Woods will be able to ride a cart if he chooses.

“My excitement level is high just for him being out here and being somewhere other than his house and getting to see a lot of familiar faces,” said Justin Thomas, one of his closest friends on tour who won the PNC Challenge last year with his father, a longtime club pro.

“And I know spending time with Charlie is a huge deal to him. In terms of competing, I think his expectations are very low,” Thomas said. “But at the same time, he is who is for a reason. So I'm sure he'll be (ticked) off if he didn't play well.” Woods was not expected until the Friday pro-am.

Among the teams is a pair of major champions — Nelly Korda (Women's PGA Championship) and her father, Petr (Australian Open tennis in 1998). Korda said she hardly ever watches golf except when Woods is playing, and now she'll be playing in the group ahead of him at the Ritz Carlton Golf Club Orlando.

Korda said it would be a chance to create memories with her father, but that's not all. “Playing right in front of Tiger Woods is pretty cool, too,” she said. “I'm not going to lie. I'm being a little selfish here, but that's pretty cool.”

Woods and son will be playing in the final group with the Thomas duo, a pair of familiar faces. Thomas was among the players from the next generation who often stopped by his house to encourage Woods when he was recovering from fusion surgery in 2017.

Now it's a family affair. Mike Thomas specialized in working with juniors when he was at Harmony Landing outside Louisville, Kentucky. While technically not his coach, he has been a second set of eyes for Charlie, and the 12-year-old has taken to Justin Thomas.

Thomas, meanwhile, has turned to Woods as a mentor. He said Woods has shared plenty of nuances about golf and competition, which he doesn't plan on sharing because he considers it to be an advantage. And there is a lot that Woods doesn't tell him.

“Because he knows that he still likes golf and wants to beat me when we're playing,” Thomas said with a laugh. “But I think just being there as a friend is most important as a mentor, kind of pushing each other along the way.” Such is the friendship that the words can be on the sharp side.

Thomas shared one story in which he had played with Woods in competition for the first time — he couldn't recall if it was the Hero World Challenge in December 2017 or at Riviera that following February — and asked Woods what part of his game needed work.

This was after Thomas had won his first major and qualified for his first U.S. team. “Immediately, he's like, You don't have near enough shots. You can work it, but you don't have enough shots to be as dominant as I was' kind of thing," Thomas said.

Thomas said he has noticed similar qualities about younger players on the verge of going to the next level — not enough shots — that “I can see why he saw it in me now. I also wouldn't want it to be like, No, man, everything is great, you're doing awesome.' That would have been like, Now you're lying to me,'” Thomas said.

“You want to hear the harsh stuff. I think that's what makes a good mentor.”