Among the players will be three migrants who arrived in Italy after living in a refugee camp in Lesbos, Greece, and are now being aided by a Roman Catholic charity. 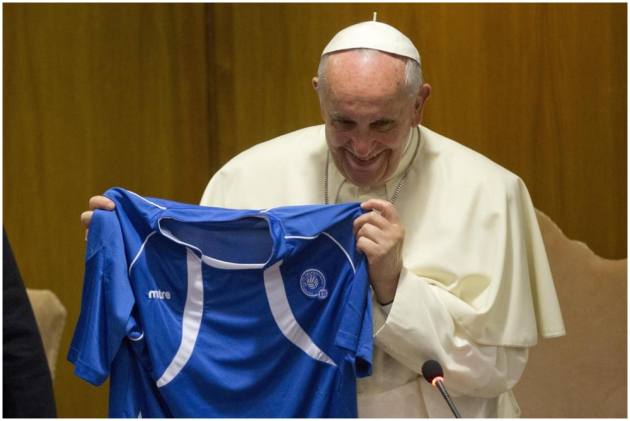 Pope Francis is hoping that a charity football match that includes Swiss Guards, Vatican employees, priests, a player with Down syndrome, migrants and members of the Roma community will deal a significant “kick” to discrimination.  (More Football News)

The match takes place on Sunday in Rome and will be refereed by Lazio team captain Ciro Immobile. The encounter on the pitch aims to raise funds for a Rome diocese initiative to promote inclusion of Roma and others considered in the Vatican’s description as among society’s “most fragile” members.

“It’s a team where there aren’t any barriers and which makes inclusion the simple normality,” Pope Francis told an audience of the game’s participants on Saturday in the Vatican’s Apostolic Palace.

Pope Francis in much of his speech described the challenges the Roma community faces. In September, during a pilgrimage to Slovakia, the pontiff visited a Roma community.

“Dear Roma friends, I know well your history, your reality, your fears and your hopes,” Pope Francis told participants of the soccer match, which he said “indicates that the way toward peaceful co-existence is integration.”

The pope noted that in Croatia there are sports initiatives aimed at inclusion for Roma, which he praised for facilitating “reciprocal acquaintance and friendship.” He also expressed hope that the dream of children, who “have the right to grow up together,” isn’t shattered by discriminatory barriers.

“It doesn’t matter who will score the most goals, because the decisive goal you’ll score together, the goal that makes hope win and gives a kick to exclusion,” Francis said.

Among the players will be three migrants who arrived in Italy after living in a refugee camp in Lesbos, Greece, and are now being aided by a Roman Catholic charity. The pope visited Lesbos in 2016 and brought a dozen Syrian Muslims back with him aboard his return flight to Rome. The pontiff will return to Lesbos during travels early next month.