Manchester United were playing their first game in 16 days after Covid-19 cases in the squad led to their two Premier League 2021 games being postponed. The draw left Manchester United on 28 points same as West Ham. 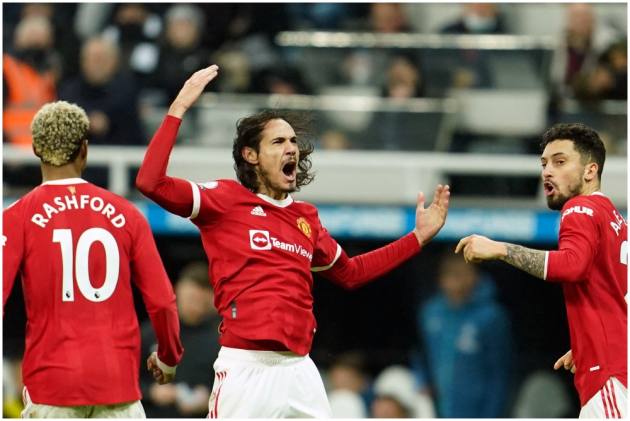 Edinson Cavani came off the bench to salvage a point for Manchester United from a sloppy display in a 1-1 draw at Newcastle in the Premier League 2021-22. (More Football News)

Playing their first game in 16 days after coronavirus cases in the squad led to two games being postponed, Manchester United were outplayed on Monday in the first half and Allan Saint-Maximin gave Newcastle the lead in the seventh minute following a swift break after Raphael Varane was dispossessed.

Cavani entered as a halftime substitute, injected some urgency and pressing into United’s attacking play, and scored an equalizer in the 71st minute by poking home a rebound after his initial shot was blocked.

Newcastle, which hit the post in the final minutes through substitute Dwight Gayle, was denied just a second win of the campaign and stayed in next-to-last place, while seventh-place United missed a chance to jump to fifth with a display that showed the team still has plenty of work to do under recently hired coach Ralf Rangnick.

His team was so off the pace in the first half — perhaps due to the extended COVID-enforced break — that Rangnick opted to make two substitutions at half time, with Fred and Mason Greenwood coming off.

Any of the outfield players could easily have been replaced. “I didn’t like it all,” Rangnick said of United’s performance. “We are trying to get better at controlling the game. Today we didn’t control the game.”

Bruno Fernandes was often seen waving his hands in the air, complaining at the referee and his teammates. Marcus Rashford looked lost out on the right wing. Varane and Harry Maguire were being hounded in possession at center back.

United, back playing after having games against Brighton and Brentford called off, was lucky to go to the break only 1-0 down. That goal came after Sean Longstaff pressurised Varane, picked him off and played in Saint-Maximin, who cut inside Maguire and poked a finish into the corner.

Saint-Maximin then squandered a brilliant chance from point-blank range to make it 2-0 in the 47th minute, mishitting a finish from Emil Krafth's cross to allow David De Gea to claw away the ball when he should have been well beaten.

From then on, United had the better of the chances, with Cavani shooting wide with the goal at his mercy before eventually equalizing at the second attempt after being picked out by Diogo Dalot's cross.

However, a late flurry from Newcastle saw Gayle curl a shot against the post before Miguel Almiron regained the ball and had a curling shot tipped over the bar acrobatically by De Gea.

Rangnick questioned the physicality and energy levels of his players. “It’s a question of rhythm but we shouldn't look for excuses,” he said. “We need to get more physical and more precise with the ball.”

Newcastle lost forwards Callum Wilson and Saint-Maximin to injuries, and manager Eddie Howe said his team was “dangerously close” to having so many absentees — either COVID-19 cases or injuries — that its game at Everton on Thursday will be under threat.

Still, he was delighted with Newcastle's display, possibly its best of the season. “Hopefully we've seen the beginning of a team and how we want to play,” said Howe, who was brought in as manager in November following the takeover of the club by Saudi Arabia's Public Investment Fund.

Fernandes collected a fifth yellow card of the season and will miss United's next game, against Burnley on Thursday when Cavani might expect to start after his game-changing performance as a substitute.