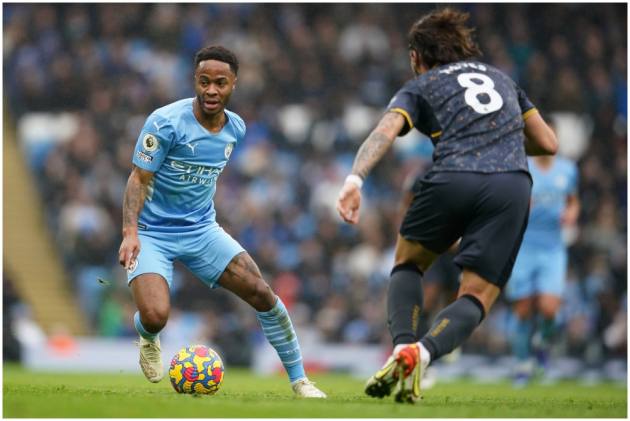 Manchester City needed a disputed penalty to secure a 1-0 win over 10-man Wolverhampton Wanderers on Saturday and ensure it stayed atop the Premier League 2021-22 on Saturday. (More Football News)

City were awarded a spot-kick for handball when Joao Moutinho blocked a cross from Bernardo Silva with his arm outstretched, although Wolves argued that the ball hit his armpit.

Raheem Sterling calmly converted the penalty straight down the middle in the 66th minute for his 100th Premier League goal, which proved enough on a day when City’s high-powered attack struggled to make the most of its chances.

Wolves had gone a man down just before the halftime break when Raul Jimenez was first booked for a tackle near the halfway line then inexplicably stretched his leg out to block the resulting free kick to earn a second yellow card straight away.

Jack Grealish missed a stellar chance to double the lead in the 70th when he poked the ball over the bar from close range after a cross from Sterling across the box. The win made sure Pep Guardiola’s team will stay in front of closest rivals Liverpool and Chelsea, who both played later Saturday.

There was a lengthy stoppage on the half-hour mark after a clash of heads between Wolves teammates Max Kilman and Ruben Neves. Both players were able to continue after treatment but the rest of the first half was hot-tempered and filled with niggling fouls and stoppages.

The win made sure Pep Guardiola’s team will stay in front of closest rivals Liverpool and Chelsea, who both played later Saturday. Wolves remained in eighth place, with manager Bruno Lage lamenting what he called a ‘very strange’ penalty decision.

“You need to understand, OK, he put his arm (up) to create a bigger body, but where did the ball touch?” Lage said. “I protect the VAR, but come on.”