Sergio Aguero was finally among the goals again, while Thomas Tuchel equalled a couple of records as his promising start at Chelsea continues. 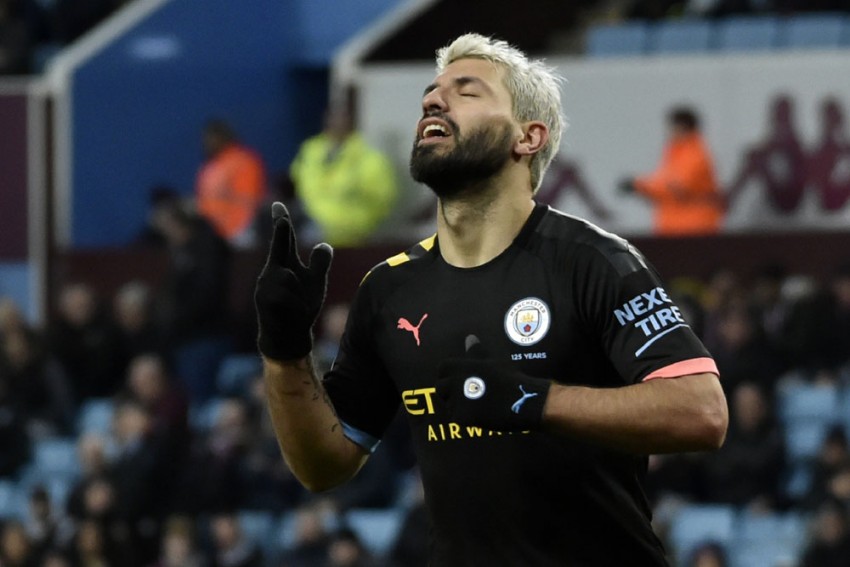 Four-hundred-and-seventeen days – that's how long it was between the two most recent goals of one of the Premier League's all-time great strikers. (More Football News)

Sergio Aguero finally ended the most difficult spell of his Manchester City career on Saturday as he found the net against Fulham with his 181st in the Premier League.

It put the icing on a comfortable win at Craven Cottage that takes Pep Guardiola's men a step closer to Premier League glory.

Another man hoping to have a Guardiola-like impact eventually elsewhere in the Premier League is Thomas Tuchel, who equalled a couple of records earlier in the day – though his Chelsea still clearly have significant room for improvement.

Burnley claimed a historic win on Merseyside to continue their battle to avoid relegation, which is looking a certainty for a West Brom side that were defeated by Crystal Palace.

Below, we take a look at the best Opta facts from Saturday's matches.

@ManCity have won their last eight away #PL matches, in which they have scored 22 goals and conceded only three#FULMCI pic.twitter.com/5B9otxlGeG

Guardiola left out several key players for the trip to a Fulham side who had beaten Liverpool last weekend, with City facing a big week consisting of a Champions League last-16 second leg and an FA Cup quarter-final.

Nevertheless, his starting XI was still rather star-studded – after all, the three goalscorers were John Stones, Gabriel Jesus and Aguero, the fourth-most prolific player in Premier League history.

Stones' opener just after the break was his fourth in 10 Premier League games, a remarkable feat given he'd scored only once in his first 170 top-flight outings.

Jesus has also been in fine form of late, his well-taken goal after rounding Alphonse Areola was his eighth in 10 starts across all competitions, though at full-time much of the focus was on his strike partner. 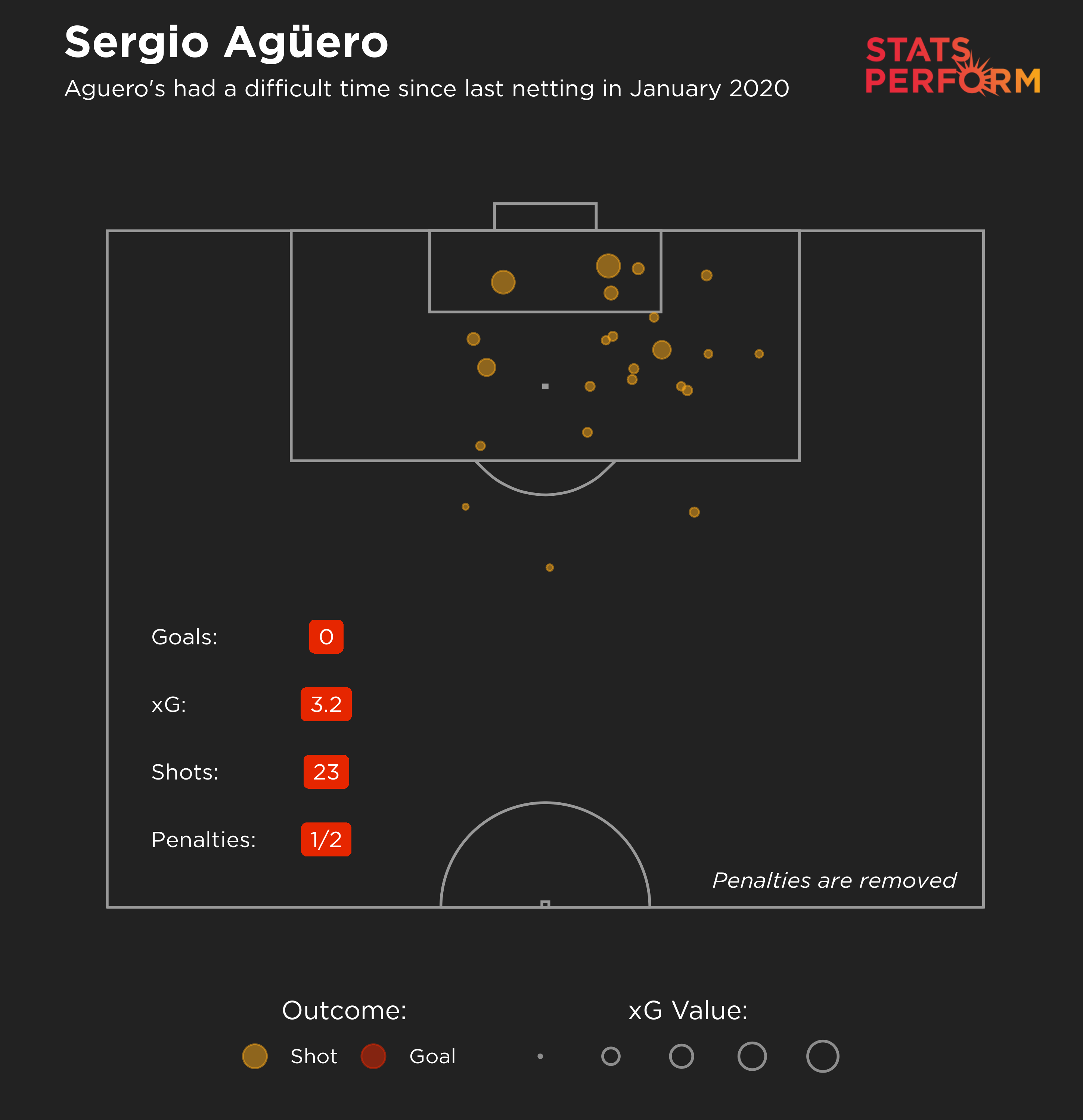 Perhaps we should have expected the South American pair to deliver the goods given in their 12 previous league starts together they had combined for 22 goals (Aguero – 14, Jesus – eight).

Aguero's penalty here ended a run of 13 matches, 641 minutes of play and 24 shots without a league goal for City, this spell stretching back to January 21, 2020 – now he's locked in again, he will be targeting a strong finish to what could be his final campaign for the club.

He's just six goals behind Andy Cole in the Premier League goalscorers' list – can he do it?

417 - Sergio Agüero has ended a run of 13 appearances, 641 minutes of play and 24 shots without scoring in the Premier League, with his penalty against Fulham his first league goal since January 2020 v Sheff Utd, 417 days ago. Awaited. #FULMCI pic.twitter.com/klMMRZwPTL

Leeds United 0-0 Chelsea: Tuchel ties a record despite another stalemate

Whatever your opinion of Frank Lampard's dismissal or the brand of football employed by his successor Thomas Tuchel, you cannot deny the German is making an impression.

Saturday's 0-0 draw at Elland Road extended his unbeaten start at the club to 12 matches, which levelled a club record – though the fact Luiz Felipe Scolari was the previous Chelsea boss to manage this perhaps proves we should not get too carried away yet.

On top of that, and lending credence to those who feel Tuchel's influence has not been entirely positive, is this was the third 0-0 draw in 10 league games for the new man. In their previous 57 under Lampard, they were only involved in two goalless matches. 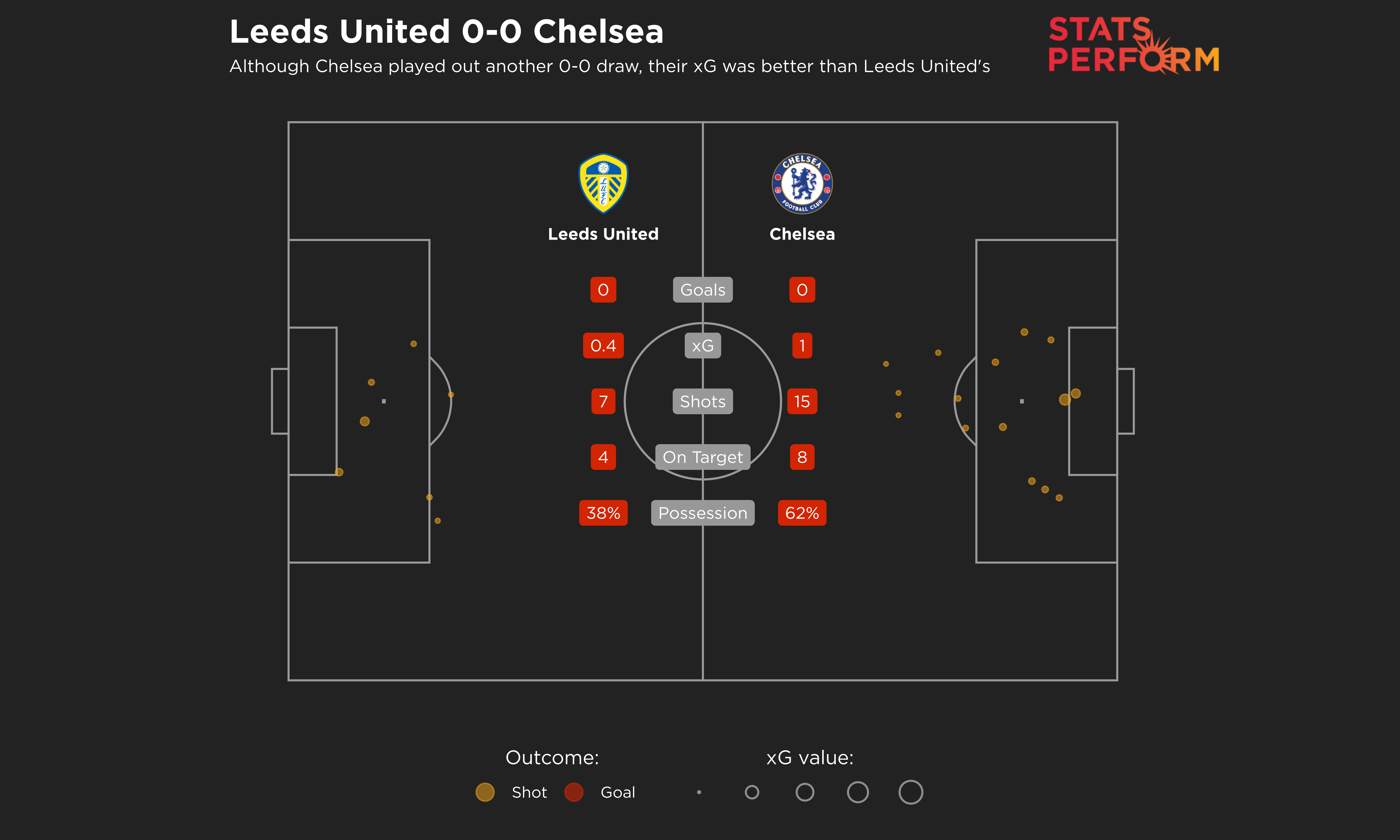 Nevertheless, in those 10 matches the Blues have conceded just twice, equalling a Premier League record set by Jose Mourinho in his early days at Stamford Bridge.

As such, it probably will not come as a huge surprise to know this was Edouard Mendy's 14th Premier League clean sheet of the season, a haul bettered by only Ederson (16) this term.

3 - Chelsea have had more goalless draws in 10 Premier League games under Thomas Tuchel (3) than they did in 57 under Frank Lampard (2). pic.twitter.com/kElnYZVrB4

Sam Allardyce's unique selling point of never being relegated from the Premier League is edging closer to irrelevance every week at the moment, with their 1-0 defeat at Selhurst Park meaning they end the day eight points adrift of safety.

It was not as if they were utterly outclassed by Palace, one of the sides Allardyce has previously steered to safety, however. The hosts' winning goal came from the penalty spot.

It was their 56th penalty in Premier League history, 11.5 per cent of their 487 total – that is the highest ratio of any club with 200 or more goals in the competition.

But with this game as a prime example, Luka Milivojevic proves it can pay to have a dependable spot-kick taker – he scored his 22nd such goal in the Premier League, which equates to 79 per cent of his 28. No player with more than 25 goals in the competition can rival that record.

While it was a day to forget for Allardyce against a former employer, the same cannot be said for Roy Hodgson, who secured his 12th Premier League win over one of his old teams, which is a record.

79% - 22 of Luka Milivojevic's 28 Premier League goals have been penalties (79%), the highest ratio of any player with at least 25 goals in the competition. Slotted. #CRYWBA

Goodison Park and Anfield would rarely be considered the likeliest of destinations to pick up away wins, but this year is seeing visiting teams leaving with the spoils on a startlingly regular basis.

This was the fifth time in 2021 that Everton have lost in their own stadium, with Liverpool (six) the only teams to suffer more.

Burnley have now won at both grounds this season, they first time they have managed such a feat, while only Manchester City and Fulham have done so previously.

The decisive goal ultimately proved to be Dwight McNeil's glorious strike, his fourth from outside the box in the Premier League, with Chris Wood having previously opened the scoring with his 40th Premier League goal for the club – Ashley Barnes (41) is the sole Burnley player to have more.

Dominic Calvert-Lewin pulled one back with his 14th goal of the season. Although it had little impact on the outcome, it did make him only the second Englishman to that figure in a single Premier League campaign (Tony Cottee in 1993-94, with 16).

3 - Burnley have won away games against both Everton and Liverpool in a single league campaign for the very first time, and are the third side to do so this season after Manchester City and Fulham. Ferry. #EVEBUR pic.twitter.com/lYEfPTkXE1