Premier League: Manchester City Aim To Get Back To Winning Ways Against Watford

After suffering a shock 3-2 defeat to Norwich City, Manchester City will be looking to get their Premier League campaign back on track when they face Watford on Saturday. 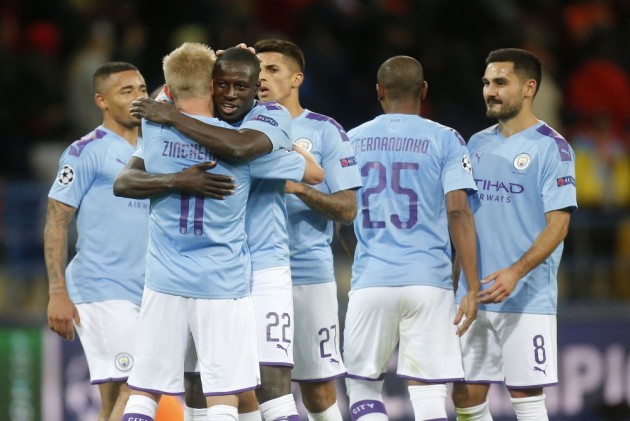 Fernandinho stepped seamlessly into Manchester City's backline in midweek to ease Pep Guardiola's defensive woes but the Premier League champions know their stretched resources will be tested by a physical Watford side on Saturday (September 21).

The clubs last met in the FA Cup final in May, with City romping to a 6-0 victory to complete the first-ever domestic treble in English football history.

But just four months later Guardiola, whose side are already five points behind Jurgen Klopp's rampant Liverpool, is facing a serious headache at the back, with Aymeric Laporte and John Stones out for significant spells.

Frenchman Laporte, described as the best left-sided defender in Europe by Guardiola, is out until at least February after injuring knee ligaments in the recent win over Brighton.

That left Stones, whose start to the season was hampered by injury, as the only specialist centre-half left to partner Nicolas Otamendi, a player who has not been an automatic first choice for some time.

England defender Stones, however, suffered a muscle injury in training and reports suggest he could be out for four to five weeks.

City appear to be paying the price for a curious strategy in the transfer market.

Over the past two years they have shown strong interest in Virgil van Dijk and Harry Maguire, only to baulk at paying what turned out to be world record transfer fees for defenders.

Van Dijk went to Liverpool for 75 million ($93m) while Maguire ended up at Manchester United for 80m.

Given the vast wealth of the club's Abu Dhabi ownership, and the fact they have broken their own club transfer record in each of the past two summers, such caution when it comes to signing centre-halves seems curious.

Guardiola also famously spent big on three full-backs -- Kyle Walker, Danilo and Benjamin Mendy -- in a matter of days in 2017 which makes his, and City's, refusal to compete with Liverpool and United for centre-halves all the more baffling.

The upshot of their approach was that they failed to replace veteran club skipper Vincent Kompany, who returned to Belgium.

City's refusal to go toe to toe with their rivals means they face Watford, and new manager Quique Sanchez Flores, with only Otamendi as a fit, specialist central defender.

Watford are bottom of the league but come into the match buoyant after recovering from 2-0 down to draw 2-2 against Arsenal.

At least Guardiola has a ready-made solution, with defensive midfielder Fernandinho playing at centre-back for the midweek visit to Shakhtar Donetsk, where City won 3-0.

The City manager has long spoken of moving Fernandinho back into that position as his career draws to a close although his hand has been forced by the injuries.

"That's why he is so important for us," said Guardiola after the victory in his side's Champions League opener.

"We don't have many choices. I think he is the only one I have. Other players can play in that position but Fernandinho is a clever player and so intelligent -- an incredible guy.

"He did well the first game he played. Of course he has a lot of experience and personality, and what he says the people follow him in the locker room so it's important."

Right-back Walker is another player who could move into the centre of defence in an emergency but, with Fernandinho in the veteran stage of his career now at 34,

Guardiola is one injury away from a full-blown crisis.