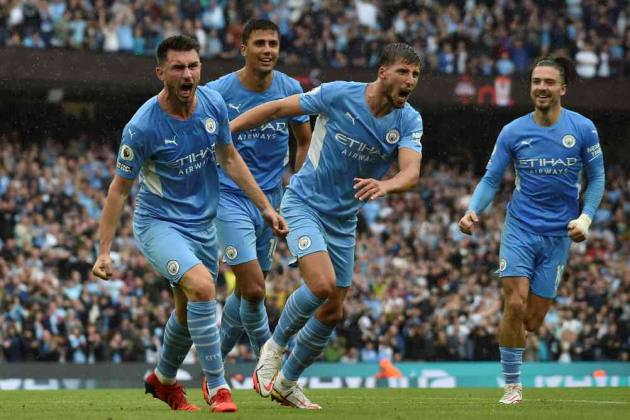 Jack Grealish scored his first goal since a British-record $139 million move to Manchester City in a 5-0 win over Norwich on Saturday, helping the champions earn the first points of their Premier League title defense. (More Football News)

The ball deflected in off the inside of the England midfielder's left leg from close range after a driven cross by Gabriel Jesus flew across the face of the six-yard box.

That 22nd-minute goal made it 2-0 for City, which went ahead via an own-goal by Tim Krul when an attempted clearance by Norwich defender Grant Hanley smashed unwittingly into the goalkeeper following a cross by Jesus.

Aymeric Laporte and substitutes Raheem Sterling and Riyad Mahrez added further goals after halftime, continuing Norwich's tough start to its return to the top flight after a 3-0 loss to Liverpool last weekend.

City bounced back from a 1-0 loss at Tottenham in the opening round of the league season and Grealish is already looking like an integral member of Pep Guardiola's team.

While he mostly played as an attacking central midfielder against Spurs, Grealish operated as a left winger against Norwich with Sterling starting on the bench and Phil Foden still injured.

It remains to be seen where Guardiola sees Grealish's best position but his versatility will certainly come in handy, especially if City doesn't manage to sign Harry Kane from Tottenham in this transfer window.

City has two players best suited to playing as a center forward — Ferran Torres and Jesus — and both started at Etihad Stadium, with Torres as the striker and Jesus on the right.

Jesus was particularly impressive, albeit against modest opposition, and he set up the first two goals.

Norwich labored in the second half as City showed off its strength in depth.

After Laporte turned in a shot in the 64th following a ricochet from a corner he initially flicked on, Sterling scored the fourth goal seven minutes later by tapping in a right-wing cross by Kyle Walker.

Mahrez completed the rout when he was played through on goal by Ruben Dias' lofted pass and finished off the post. (AP)