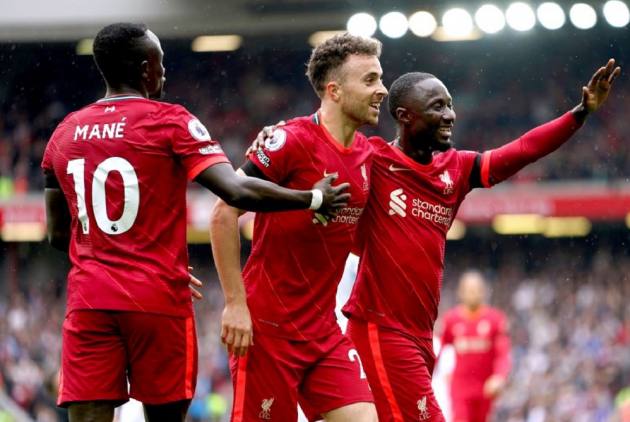 Liverpool marked its first game in front of a capacity crowd at Anfield in nearly 18 months by beating Burnley 2-0 on Saturday, with goals by Diogo Jota and Sadio Mane earning their team a second straight win to open the season. (More Football News)

Jota, who scored the first goal in Liverpool's 3-0 victory at Norwich last weekend, glanced in a header off a cross by left back Konstantinos Tsimikas in the 18th minute in front of The Kop.

Mane struck home a powerful, low shot from a central position from Trent Alexander-Arnold's deft pass in the 69th.

Since the last time there was a full house at Anfield — in March 2020 — Liverpool has won the league title for the first time in 30 years and relinquished it to Manchester City.

So there was something of a party atmosphere for what ended up being a routine win against Burnley, which had claimed a shock victory in the same fixture last season to end Liverpool's 68-game unbeaten run at Anfield in the league.

There was also time for remembrance, with Liverpool captain Jordan Henderson laying a wreath at the center circle before kickoff in memory of Andrew Devine, who recently became the 97th person to die as a consequence of the Hillsborough stadium disaster in 1989. There was a mosaic on The Kop displaying the numbers “97” as well as a minute's silence.

A walkway outside Anfield has been renamed in tribute to Devine.

Burnley fielded a lineup with players wearing jerseys with the squad numbers 1-11, a rarity in modern-day football. Indeed, it was the first time it had happened in the Premier League since 1998, according to British broadcaster BT Sport.

Tsimikas is set to lose his place in the team, with Andrew Robertson returning to fitness after a minor ankle ligament injury. The Greek defender's parting gift was an assist from a pinpoint delivery into the penalty box, where Jota got in front of Burnley center back Ben Mee and guided a header low past goalkeeper Nick Pope.

Mohamed Salah, needing two goals to reach 100 in the Premier League after barely four seasons, had a goal disallowed for a narrow offside midway through the first half, after which Mane volleyed over from another pass from Alexander-Arnold.

Burnley was quite dangerous on the break and off set pieces — from one long free kick, James Tarkowski beat Liverpool goalkeeper Alisson in the air but headed just wide from the edge of the area — but was subjected to wave after wave of attacks from the home side in the second half.

Salah had a shot cleared from near the line by Dwight McNeil and Mane had a low effort saved by the feet of Pope, who could do little about the Senegal forward's thumping shot to make it 2-0. It came at the end of a sweeping move from Liverpool, featuring a long ball forward by Virgil van Dijk, who again played the full game on his comeback from injury, and some neat touches by young midfielder Harvey Elliott, who also completed 90 minutes. (AP)