Harry Kane was on target again as Tottenham eased past Aston Villa, while West Ham scored two own goals in a thrilling draw with Arsenal 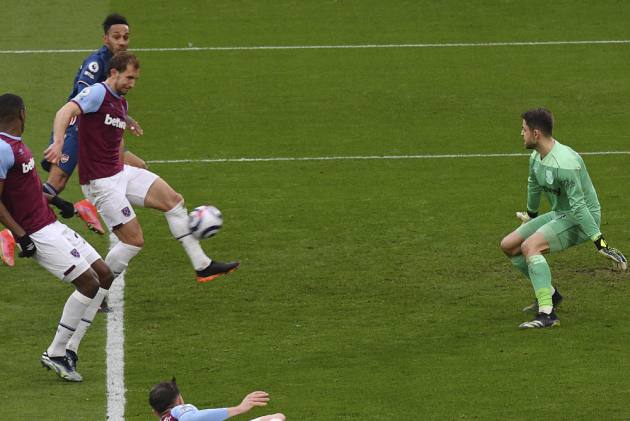 Tottenham bounced back from a dreadful week to keep their hopes of a top-four Premier League finish alive. (More Football News)

A north London derby defeat to Arsenal was followed by a shocking Europa League exit at the hands of Dinamo Zagreb, but Jose Mourinho's men comfortably swatted aside Aston Villa 2-0 to move to within three points of fourth-placed Chelsea.

The Gunners, meanwhile, produced a stirring comeback to seal a 3-3 draw against West Ham, David Moyes' side giving them more than a little assistance.

There were also wins for Brighton and Hove Albion and Leeds United over Newcastle United and Fulham respectively.

Using Opta data, we look at some of the more quirky facts from the weekend's top-flight action.

Spurs bounce back from European nightmare

Jose Mourinho demanded a positive response from his side after their dismal Europa League exit to Dinamo Zagreb on Thursday and they duly delivered.

Goals in either half from Carlos Vinicius and Harry Kane sealed a fourth win in five Premier League games for Spurs, while they became the third side to win six consecutive top-flight away games against Villa, after Manchester United (2003-2007) and Liverpool (2011-2019).

Vinicius has now scored nine goals in his nine starts for the club across all competitions, the Brazilian needing just 12 shots to do so.

That kind of accuracy is familiar to Kane, who has been directly involved in 30 goals in the Premier League this season (17 goals, 13 assists). The England captain is the first player to reach that total in the 2020-21 competition, while it is the first time he has achieved this since 2017-18 (30 goals, two assists).

Villa might point to the absence of the talismanic Jack Grealish as a contributing factor to their poor display. The Villains have a 17 per cent win ratio in the Premier League games without the England international, which rises to 50 per cent when he is in the side.

Hammers give Arsenal a helping hand

West Ham players scored five goals in their clash against Arsenal at the London Stadium, yet David Moyes' side had to make do with a 3-3 draw.

The Hammers took a 3-0 lead against Mikel Arteta's men, but ended up with just a point after Tomas Soucek and Craig Dawson put into their own nets before Alexandre Lacazette's late leveller.

It meant Moyes' outfit became the first team to score two own goals in a Premier League game since Swansea (also against Arsenal) in January 2017, while Soucek became the first player to score at both ends of the pitch in the same home top-flight game for West Ham since Frank Lampard against Leicester City in November 1998.

The collapse meant West Ham failed to win after being three goals ahead in a Premier League game for the first time since September 1998 when they lost 4-3 to Wimbledon.

Following their 3-3 draw with Tottenham earlier in the season, the result meant the Hammers have been involved in two of the Premier League's three three-goal comebacks this season – the most instances in a single campaign since 2010-11 (also three).

There is nothing boring about them these days.

Leeds' trips to London have largely been fruitless affairs in recent years, but they returned to winning ways in the capital with a slender triumph over Fulham.

Patrick Bamford and Raphinha were on target as Marcelo Bielsa's side sealed a first win there in 17 games across all competitions, with their previous success coming in the shape of a 3-1 win against QPR in 2017.

Bamford brushed off his disappointment at not being included in Gareth Southgate's England squad to become the first Leeds player to score in four straight league appearances against a single club since Luciano Becchio against Middlesbrough between 2010 and 2012.

Joachim Andersen had given the Cottagers hope of securing at least a point when he joined Bjarne Goldbaek and Claus Jensen as the only Danish players to score for the club in the Premier League.

Raphinha brought home the bacon for Leeds, though, scoring his sixth goal since his first top-flight start in November – only Bamford has scored more (seven) in that period.

The Seagulls' comfortable victory was their second at the Amex Stadium in 2021 – double what they achieved at home in 2020.

Leandro Trossard, Danny Welbeck and Neal Maupay were on target for the hosts, with the former pair's strikes both coming from outside the penalty area – the first time Brighton have scored two such goals since a clash with QPR in April 2017.

They have now played more Premier League games against Newcastle (eight) without losing than against any other side in the competition, Graham Potter's side winning four and drawing four.

The Magpies have scored just one goal in those games, with only Sheffield United having faced a side more often while netting just once in the competition, the Blades hitting the back of the net on a solitary occasion in 10 games against Manchester City.