A flurry of snow could not slow Arsenal as they enjoyed a third straight Premier League win, dismantling West Brom at The Hawthorns. 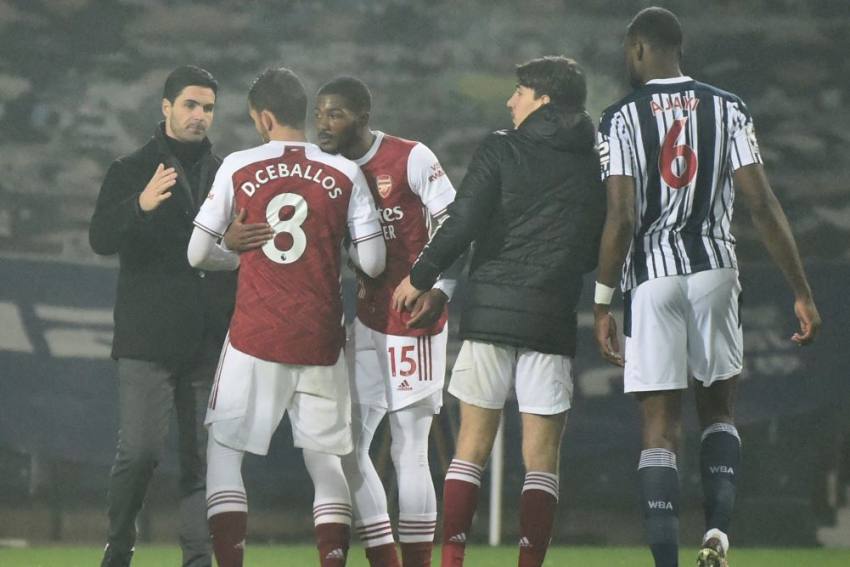 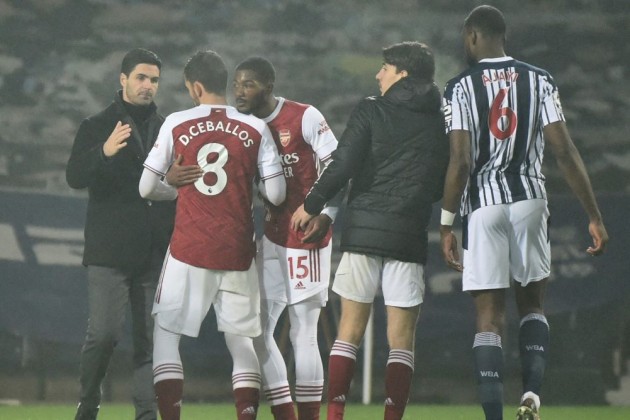 Arsenal claimed a stylish 4-0 win over West Brom at a snow-covered Hawthorns to continue their Premier League resurgence on Saturday.

After a seven-match winless run in the top flight prior to Christmas, the Gunners defeated Chelsea at home and Brighton and Hove Albion away and were full of confidence against Sam Allardyce's struggling side.

Fine first-half goals five minutes apart from Kieran Tierney and Bukayo Saka - the first a sublime solo strike, the second a flowing team move - made a mockery of tricky conditions and moved Arsenal out of sight.

Alexandre Lacazette added a comical clincher and later doubled his tally as a third straight victory boosted Mikel Arteta's men up to 11th, now suddenly looking up the table rather than back towards the relegation scrap in which West Brom remain mired.

Arsenal had quickly assumed control in the falling snow, although Matt Phillips might have done better than shoot straight at Bernd Leno from a rare West Brom opening.

The visitors heeded that warning and soon led when Tierney pushed the ball past Darnell Furlong on the left flank, then checked back inside to beat his opponent again and finally beat Sam Johnstone with a curling right-footed effort.

The swift second was equally impressive, albeit an entirely different kind of goal as Emile Smith Rowe moved the ball on to Saka and continued his run while Lacazette took possession and fed a pass back into his path. Through on goal, Smith Rowe unselfishly squared to find Saka once more for a simple finish.

A flag denied West Brom an early second-half response as Matheus Pereira ran offside before his drive against the post landed back at the feet of Callum Robinson with the goal gaping.

Instead, a bizarre third went Arsenal's way when Semi Ajayi awkwardly volleyed against his own post and recovered to block Smith Rowe's follow-up but watched Lacazette lash in the rebound - the Frenchman netting in a fourth consecutive match in all competitions.

He had another four minutes later, kneeing in Tierney's drilled cross, with West Brom ultimately fortunate to escape further punishment.

What does it mean? Arteta's Arsenal back on track

Despite winning the FA Cup, the previous calendar year was a tough one for Arsenal and their rookie boss. Now 12 points clear of the bottom three and only six shy of the top four, the narrative has quickly turned in the London giants' favour.

There were no shortage of impressive performers, led by Tierney, Smith Rowe, Lacazette and, of course, Saka.

Saka going from strength to strength

Saka was the subject of much post-match discussion at Brighton after a superb assist for Lacazette but this time profited from the fine work of his team-mates to score himself. It was no less than the winger deserved, however.

Although only one of his seven crosses found a team-mate, technically creating just a single chance, two sensational early centres were begging for a telling touch at the far post as Pierre-Emerick Aubameyang failed to convert, while another delivery prompted the chaos that preceded the third.

It is difficult to understand how the same team that held Manchester City and Liverpool on the road could have conceded 12 times across Allardyce's first three home matches in charge.

4 - With no club has Sam Allardyce won fewer points (1 – level with C. Palace) or conceded more goals (13) after his first four Premier League games in charge than he has with West Brom. Awakening. pic.twitter.com/CNaP0wLKHK

Johnstone had already blocked from Hector Bellerin before the opener flew in and then three times denied Lacazette before the forward finally got his goals. The goalkeeper finished with eight saves, attempting to stem the flow of goals almost singlehandedly behind a desperate defensive display.

- West Brom are the first side to lose consecutive home Premier League games by at least four goals in each defeat since Wigan Athletic in August 2010.

- With no club has Allardyce won fewer points (one – level with Crystal. Palace) or conceded more goals (13) after his first four Premier League games in charge than he has with West Brom.

-  Arsenal have scored in all 25 of their Premier League meetings with West Brom, the best 100 per cent scoring record by one side against an opponent in the competition's history.

- There were 20 passes in the build up to Arsenal's first goal - since Arteta's first game in charge on Boxing Day 2019, the Gunners have scored more goals following a sequence of 20+ passes than any other Premier League side (three).

- Since the start of last season, Saka has been directly involved in 22 goals in all competitions (seven goals, 15 assists) - the second most by a teenager currently playing for a Premier League side after Manchester United's Mason Greenwood (25).

Arsenal can turn their attention to their FA Cup defence, approaching Saturday's third-round meeting with Newcastle United in high spirits. A trip to Blackpool is on the agenda for a West Brom side in dire need of some respite.