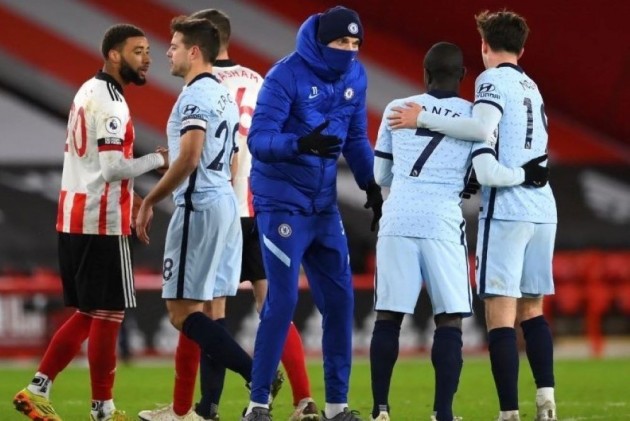 Thomas Tuchel maintained his unbeaten start to life at Chelsea as goals from Mason Mount and Jorginho sealed a 2-1 Premier League win over Sheffield United at Bramall Lane on Sunday.  (More Football News)

The German's first game in charge after replacing Frank Lampard was an underwhelming 0-0 draw with Wolves, but he has now masterminded three wins on the spin to move the Blues up to fifth, one point behind fourth-place Liverpool.

They did not have it all their own way against Chris Wilder's side, however, the Yorkshire side cancelling out Mount's first-half opener after the interval courtesy of a slapstick own goal from Antonio Rudiger.

Chelsea secured all three points soon after, though, when Jorginho followed up his decisive penalty against Tottenham in midweek with another successful spot-kick.

FULL TIME
It ends 2-1 to the visitors as we record a third win in a row #SHUCHE pic.twitter.com/bKJFx0bRNY

Oliver Burke squandered a glorious opportunity to give the hosts a first-minute lead, the Scotland international lashing into the side netting after being played through by Oliver McBurnie.

Timo Werner was then denied at the other end as Chris Basham tracked back superbly to clear his flicked effort over the outrushing Aaron Ramsdale.

Basham thought he had earned a penalty for his side after 12 minutes when he was brought down inside the area by Ben Chilwell, but a VAR review showed that the defender had strayed into an offside position.

The Blues went ahead two minutes before the interval, Mount superbly sweeping into Ramsdale's bottom-left corner from 15 yards after being picked out by Werner.

The hosts were gifted an equaliser in the 54th minute when Rudiger's attempted backpass to Edouard Mendy rolled past the Senegal international and into the bottom corner.

The Germany defender's blushes were spared four minutes later when Jorginho slotted home from the spot after Ramsdale had brought Werner down in the box, the decision given after referee Kevin Friend was advised to view the pitchside monitor.

Mendy pawed away Billy Sharp's overhead kick deep into stoppage time as Chelsea held on for an 18th win in their last 24 top-flight matches against teams from Yorkshire.

What does it mean? Blues march on under Tuchel

The decision to sack Lampard was not supported by all Chelsea fans, but few can argue with the impact Tuchel has had during the opening weeks of his tenure.

Rudiger's moment of madness almost cost them dear, but Jorginho's ninth successful penalty as a Chelsea player keeps them firmly in the hunt for a Champions League place.

The Blades, meanwhile, remain rock bottom and are a whopping 12 points away from safety.

Tuchel's decision to drop Mount for his first game in charge suggested the attacking midfielder could find playing time harder to come by than he did under Lampard.

He has started the following three games, though, and was central to yet another Chelsea win.

His goal means he is the second youngest player to score 10 Premier League goals for Chelsea, after only Arjen Robben.

Rudiger almost costs his side

Germany international Rudiger was largely solid at the back for Chelsea, making a joint game-high three clearances and winning all four of his duels.

However, his inexplicable own goal will live longer in the memory and might leave Tuchel with some concerns over his compatriot.

- Since beating Chelsea at Bramall Lane in July 2020, Sheffield United have only won two of their last 13 home games in the Premier League (D1 L10).

- Chelsea have won each of their last three Premier League games, equalling their longest winning streak of the season (three between October-November). This was also just the second time they have won consecutive Premier League away games this term.

- Sheffield United have kept just one clean sheet in their last 25 Premier League games, with that lone shutout coming at home to Newcastle United last month.

- Chelsea have only conceded one goal in their first four Premier League games under Thomas Tuchel – their fewest through a manager's first four league games in charge since Guus Hiddink in February/March 2009.

- Since the start of last season, Chelsea's Antonio Rüdiger is one of only five players to have scored multiple own goals in the Premier League (2), however the German has done it in the fewest appearances among this group (28).

Both sides are in FA Cup fifth-round action in midweek, with United hosting Bristol City on Wednesday and Chelsea visiting Barnsley a day later.