Premier League: Wolves Goalkeeper Rui Patricio Is Fully Conscious And 'Okay' After Blow To The Head.

The Wolves goalkeeper was forced off during the closing stages of Monday's 1-0 defeat to Liverpool after a coming together with Conor Coady. 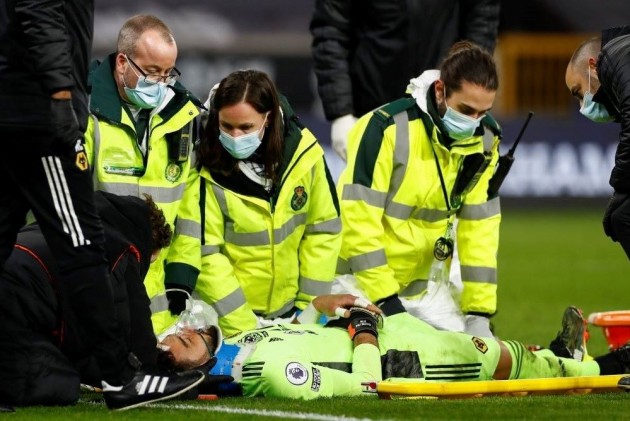 Wolves goalkeeper Rui Patricio is fully conscious and 'okay' after suffering a sickening blow to the head during defeat to Liverpool, Nuno Espirito Santo has revealed. (More Football News)

The Portuguese was forced off on a stretcher after colliding with teammate Conor Coady during injury time of Monday evening's Premier League fixture at Molineux.

Wolves' medical staff have already dealt with one serious head injury this season, Raul Jimenez suffering a skull fracture at Arsenal in November from which he has yet to return.

However, speaking after his side were beaten 1-0 by the champions, Nuno revealed that Patricio's prognosis is far more encouraging.

"[It was] a collision with Coady, I think, the knee of Coady on the head. But he's okay. We speak already, he's okay.

"All these situations, when it's a concussion on the head, gets us worried. But he's okay, he's going to recover, everything's okay."

Liverpool forward Diogo Jota scored the winning goal on his first return to Molineux since sealing a £45m summer move to Monday's visitors.

But his first thoughts after the match were for his former Wolves and current international colleague Patricio.

He said: "Life is more important. I hope it's nothing too serious and we wish him obviously a speedy recovery."