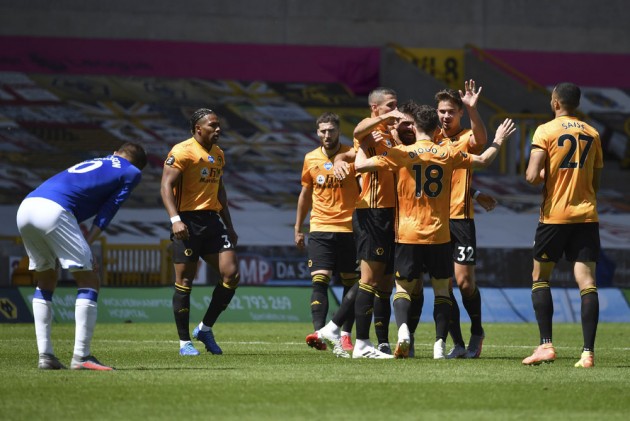 Wolves cruised to a 3-0 Premier League win over Everton to keep their Champions League hopes alive as Aston Villa claimed a crucial victory in the battle for survival. (More Football News)

Nuno Espirito Santo's men opened the scoring from the penalty spot in first-half stoppage time, as Raul Jimenez coolly converted from 12 yards after Daniel Podence was fouled by Lucas Digne.

Forty-seven seconds into the second half Wolves were 2-0 up, Leander Dendoncker nodding in Pedro Neto's free-kick.

Diogo Jota rifled in at the near post to make it 3-0 in the 74th minute after collecting a stunning ball over the top from Ruben Neves as Wolves moved within three points of fifth-placed Manchester United, who host Southampton on Monday.

5 - Diogo Jota has scored five goals for Wolves after coming on as a substitute in all competitions this season - more than any other Premier League player. Super. #WOLEVEpic.twitter.com/ZjKac97SIh

Villa faced a must-win situation after West Ham and Watford both claimed maximum points on Saturday and they delivered by defeating Crystal Palace 2-0.

Dean Smith's side gained an early reprieve when Palace defender Mamadou Sakho saw a goal chalked off for handball after VAR ruled he used his arm to divert a set piece into the net..

Trezeguet gave Villa the lead in injury time at the end of the first half, slotting in at the far post after Palace failed to defend a free-kick.

Palace looked to have conceded a penalty two minutes into the second half after Jack Grealish went over in the box. VAR intervened in Palace's favour this time but Trezeguet poked underneath Vicente Guaita in the 59th minute to secure the points.

Former Villa striker Christian Benteke was sent off after the final whistle following an off-the-ball incident with Ezri Konsa.

Villa are four points adrift of safety with three games to go.

Before kick-off, Villa pledged to issue a lifetime ban to a supporter who racially abused Palace star Wilfried Zaha on social media.