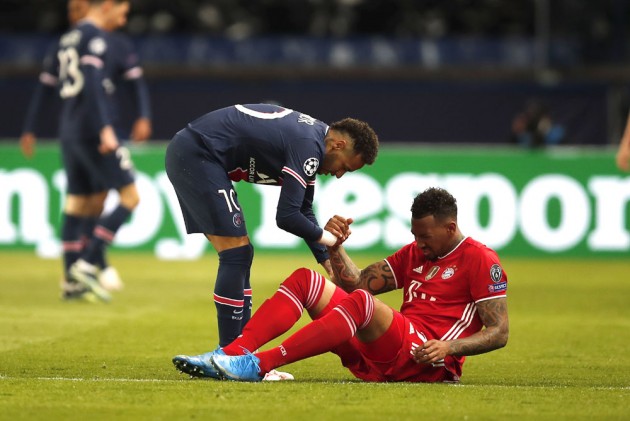 Paris Saint-Germain took their revenge as they reached the semi-finals of the Champions League at the expense of last year's winners Bayern Munich, losing 1-0 on the night but sneaking through on away goals. (More Football News)

A dazzling first-half performance from Neymar could have seen the Brazilian score a hat-trick for PSG before the break, but for brilliance from goalkeeper Manuel Neuer and two shots against the Bayern woodwork.

It therefore became worrying for the hosts, who were beaten by Bayern in the 2019-20 final, when Eric Maxim Choupo-Moting nudged the visitors ahead at the Parc des Princes and back to 3-3 on aggregate in the 40th minute.

But Bayern were without their injured talisman Robert Lewandowski and head coach Hansi Flick could have used his immense goal threat as the Bundesliga side chased the second goal they needed, ultimately without avail.

Neuer had to save well from Neymar in the early stages after Kylian Mbappe's run down the left and cut-back caused Bayern's defence to panic.

The goalkeeper made his second huge save from Neymar in the 27th minute when Mbappe's clever pass found the Brazilian 12 yards from goal, with the goalkeeper charging out to block brilliantly.

A third followed when Neymar showed quick feet on the edge of the penalty area and unleashed a blistering left-footed effort. Neymar then curled a delicious shot against the bar and moments later hit the foot of the right post from Mbappe's pass.

Yet entirely against the run of play, Choupo-Moting headed Bayern ahead. Keylor Navas was only able to parry a tame shot from David Alaba, and Choupo-Moting was alert to reach the ball first and nod over the line.

PSG raced forward to thrilling effect early in the second half, with Kylian Mbappe feeding Angel Di Maria to the right of goal, and the Argentinian's prod beyond Neuer and across goal was agonisingly out of the reach of the stretching Neymar as an empty goal beckoned.

Navas did well to thwart Thomas Muller just after the hour as Bayern, heading out on the away-goals rule, looked for the strike that would put them ahead in the tie.

They continued to forage, but whereas a 1-0 win over the Parisians was enough for glory last August in Lisbon, here it meant Bayern's title defence was over.

Mauricio Pochettino led Tottenham to the Champions League final two years ago, and could his mid-season arrival at PSG be the trigger for the Ligue 1 outfit to finally rule Europe?

His team have had sketchy moments in their domestic competition, but here they were an entirely cohesive unit against the side that lifted the trophy last year, resisting an injury-depleted Bayern side who gave everything but came up short.

Neymar gave Pochettino a giant hug after the final whistle. The Bavarians achieved a treble last season, but their reign is over and PSG now have similar goals for their season.

With Neymar and Mbappe, nobody will fancy facing them next

Bayern led the shot count 13-10 and had 55.5 per cent of possession, yet PSG edged the xG (expected goals) battle by 1.7 to 1.6, indicating they had marginally the better chances. Neymar's five shots before the interval - three of which were on target with the other two striking the goal frame - showed he was on his 'A' game.

The former Barcelona man made three key passes too. Mbappe was caught offside six times, the highest tally of any player in the Champions League this season, but that has probably not put off Real Madrid. His two first-leg goals proved priceless.

With Lewandowski and Serge Gnabry absent, Bayern lacked the required bite in attack across the two games. Nobody particularly let the side down, but Choupo-Moting was never going to carry the same threat as Bayern's prolific Pole.

Playing against his old club, Choupo-Moting got the goal he wanted, but he had just 20 touches across the whole game. Neymar, by contrast, had 85 and Mbappe had 45 as PSG's front two made the ball stick in the Bayern half.

PSG are back in Ligue 1 action when they tackle Saint-Etienne on Sunday. Bayern go to Wolfsburg on Saturday.