PSG 0-1 Marseille: Neymar And Four Others Sent Off In Crazy Le Classique Fight 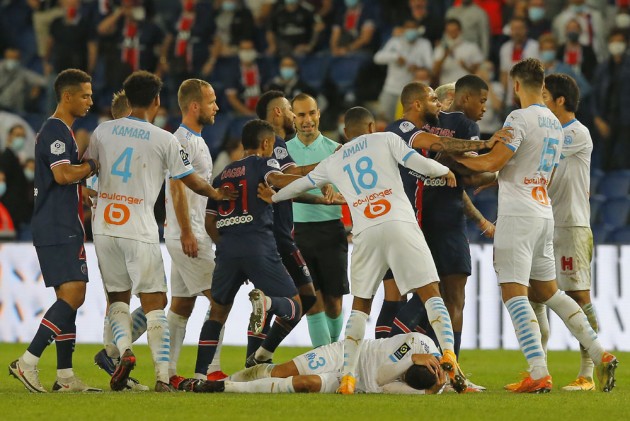 Paris Saint-Germain's poor start to their Ligue 1 campaign continued as they fell to a 1-0 home defeat against Marseille in a foul-tempered Classique where five players, including Neymar, were sent off late on. (More Football News)

Having been without seven first-team stars for Thursday's loss to Lens, Thomas Tuchel was able to welcome four of his regulars back into the fold on Sunday, yet it was Andre Villas-Boas' side – who lost 4-0 in the corresponding fixture last season – that claimed the points at Parc des Princes, where a limited number of fans were allowed in attendance.

Neymar, who earlier missed a golden chance, was among them, with the forward receiving his marching orders for hitting Alvaro, who he seemingly accused of racism when speaking to the fourth official as he left the field.

Leandro Paredes reacted violently to a foul from countryman Dario Benedetto, with both Argentinians dismissed along with Layvin Kurzawa and Jordan Amavi for their parts in the ensuing fracas.

4 - Florian Thauvin has been involved in Marseille’s last four goals in Ligue 1 (2 goals, 2 assists). He has scored his 2nd goal against Paris in the top-flight - his first at the Parc des Princes -, after the one scored in October 2017. Upset.#PSGOM pic.twitter.com/QXigusDKEA

Steve Mandanda made a spectacular save from Marco Verratti early on, and the tone for the match was set when Neymar and Dimitri Payet – who retweeted a tweet mocking PSG following their defeat at Lens – were booked for their involvement in a fracas.

Payet had the final word in that duel, though, dropping a precise free-kick over the top of PSG's defence – Thauvin on hand to finish brilliantly on the volley, with the goal standing after a VAR check for offside.

Mandanda twice made superb saves as PSG piled on the pressure after the restart, denying Pablo Sarabia and Neymar.

PSG thought they had equalised when Gueye slipped in Angel Di Maria, only for the offside flag to cut short their celebrations.

Benedetto saw an effort ruled out for a marginal offside at the other end, but Marseille held firm to end a dreadful run against their rivals – Neymar's miss from two yards out summing up a frustrating night for PSG.

Yet there was to be significant drama in stoppage time, as Benedetto provoked Parades, with both players receiving their second yellow cards.

Amavi and Kurzawa were also dismissed as the teams clashed on the field, with Brisard then consulting VAR and having little option but to dismiss Neymar for a punch in an improbably ugly finale.

What does it mean? Marseille end terrible Le Classique record

Coming into Sunday's clash, PSG had gone unbeaten in their past 20 games against Marseille in all competitions, only enjoying longer undefeated runs against Nantes and Saint-Etienne (both 22).

But Villas-Boas' side grasped their opportunity, showing a grit and determination befitting of the occasion as they condemned PSG to just a third home defeat in 76 Ligue 1 games.

Thauvin flying for Marseille
With his coolly taken opener, France winger Thauvin has now been involved in all four of Marseille's goals in Ligue 1 this term, scoring twice and providing two assists.

0 - Paris have lost their first two games of a Ligue 1 season without scoring any goal for the 2nd time of their history, after 1978/79. Unexpected.#PSGOMpic.twitter.com/GhZI0IN87O

Marseille quickly set about getting under Neymar's skin, and it seemed as though their antics worked, with PSG's talisman involved in two altercations, first with Payet and then with Alvaro, during the first half.

The Brazil superstar then missed a gilt-edged opportunity in the second half, and from six attempts, Neymar only managed to get one on target. It was his shot of the boxing variety that concluded a torrid evening, although Neymar's apparent allegation against Alvaro means presumed wind-up tactics might have been far more sinister.

PSG, who will be shorn of Neymar of course, host Metz on Wednesday, while Marseille – without Benedetto and Amavi – take on Saint-Etienne in the first of five successive home league matches on Thursday.