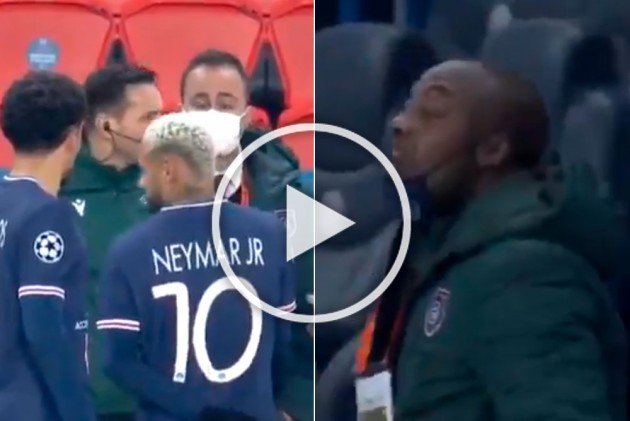 Paris Saint-Germain's UEFA Champions League clash with Istanbul Basaksehir in Paris will be resumed on Wednesday (7 pm local time), according to reports in France. The match was suspended Tuesday night after allegations of racism against the fourth official. (More Football News)

Ligue 1 tweeted that "Tonight's #UCL match between @PSG_English and Istanbul BaÅÂÂÂÂakÅÂÂÂÂehir was been called off due to an incident involving the visitors' assistant manager, Pierre Webó, and the fourth official - it will now take place tomorrow at 18:55 CET."

Tonight's #UCL match between @PSG_English and Istanbul BaÅÂÂÂÂakÅÂÂÂÂehir was been called off due to an incident involving the visitors' assistant manager, Pierre Webó, and the fourth official - it will now take place tomorrow at 18:55 CET#NoToRacism #PSGIBFK

The game was stopped after 13 minutes at Parc des Princes, with both sets of players gathering on the sidelines for more than 10 minutes before Basaksehir's players walked down the tunnel. They were followed by PSG's players.

The same has been confirmed by the UEFA.

“After discussion with both clubs – decided on an exceptional basis to have remaining minutes of match played tomorrow with a new team of match officials. Kick-off set at 18:55 (CET). A thorough investigation on the incident that took place will be opened immediately,” UEFA said in a statement.

The Turkish side also posted an image on its official Twitter account stating 'No To Racism' soon after the incident, with Galatasaray posting the same graphic in apparent solidarity with their counterparts.

Disgraceful scenes at PSG vs Instanbul. Both teams refused to start the match after accusations of racism towards the 4th official.
Play will resume shortly, after the referees have been replaced.
The referee was heard calling Demba Ba a n***er via the pitch side microphones. pic.twitter.com/bBVf03UXF3

Demba Ba responding to a comment from the fourth official in PSG vs Basaksehir. ðÂÂÂÂÂÂÂÂÂÂÂÂÂÂÂÂÂÂ³
pic.twitter.com/YtryyFdn2i

Reports in Paris suggested the match was set to resume at 22:00 CET without Coltescu on the sideline.

NO TO RACISM | #Respect pic.twitter.com/Ic1BzfANoi

In an earlier statement, UEFA said that a resumption had been agreed on the condition Coltescu was stood down.

"Following an alleged incident involving the fourth official, the match was temporarily suspended. After consultation with both teams, it was agreed that the match would restart with a different fourth official," the statement read

“"UEFA will thoroughly investigate the matter and further communication will be made in due course."