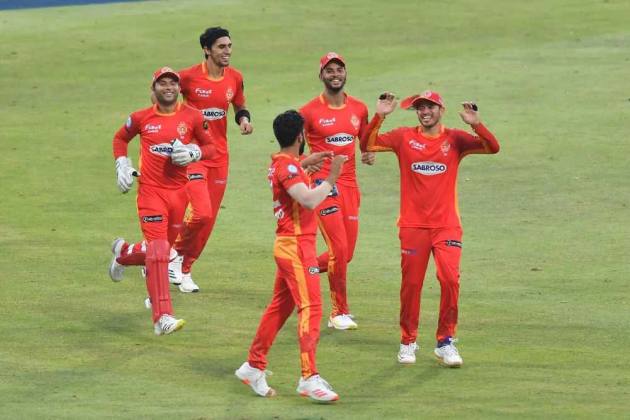 Islamabad stand-in captain Usman Khawaja hit an unbeaten 105 off 56 balls in his team's PSL record total of 247-2 after Peshawar won the toss and elected to bat in its last league game.

"It was enjoyable to bat 20 overs," Khawaja said.

"I'm not trying to take anything away from our bowlers because they put in a great effort, but Shadab was resting. We knew we were probably going one short on pace."

Islamabad bettered its own previous PSL record of 238-3 against Lahore Qalandars in 2019.

In another match, Karachi Kings kept alive their playoff hopes with a seven-run win over the Lahore Qalandars.

The Kings batted first and posted 176-5, with Babar Azam scoring 54 and Martin Guptill belted 43 from 31 balls including three sixes. The Qalandars were right in the chase with contributions from Hohammad Hafeez (36), Tim David (34) and James Faulkner (33) but the chase was strangled by some tight bowling.

Noor Ahmad, the 16-year-old Afghani left-arm spinner, took 2-19 in four overs including the wickets of Hafeez and Ben Dunk (6).

In the opening match, Australian top-order batter Khawaja set the tempo in a brisk 98-run opening stand with Colin Munro (48) off only 59 balls. Munro just missed out on his third half-century in four games.

Islamabad's ploy to promote power-hitter Asif Ali paid off for the two-time champions as he smacked five sixes and two boundaries in his 43 off 14 balls.
Brandon King added an unbeaten 46 off 22 balls.

Khawaja reached his third T20 century in the last over with a boundary followed by two successive sixes. The Islamabad-born Khawaja hit 13 fours and three sixes.

Peshawar lost Hazratullah Zazai off the first ball, but Akmal and Malik kept them in the hunt. Experienced fast bowler Hasan Ali picked up 3-43 that included the key wicket of Malik in the 17th over.

Sherfane Rutherford (29), captain Wahab Riaz (28) and Umaid Asif (20) played little cameos in the end to narrow the margin of defeat as fast bowler Akif Javed bowled well in the last over, giving away only seven runs.

"We were very pathetic in the field when we won the toss and bowled first knowing they were a bowler short," Riaz said.

"The attitude wasn't there."

Islamabad has already qualified for the playoffs, while Peshawar finished the league stage.