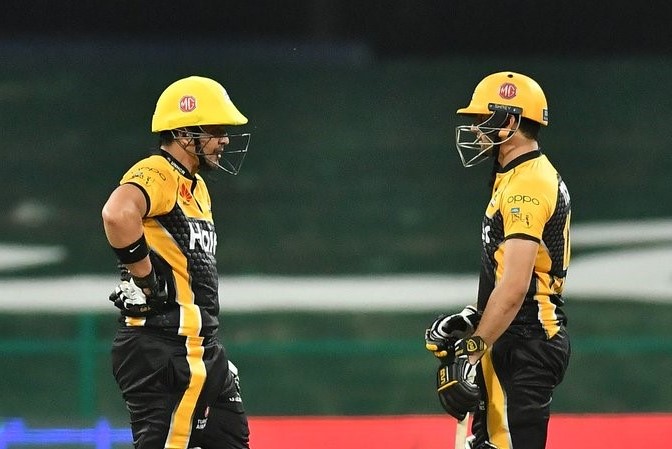 The Lahore Qalandars' batting crumbled for the second straight game in the Pakistan Super League as the Quetta Gladiators recorded an 18-run win. (More Cricket News)

Left-arm fast bowler Usman Shinwari, playing his first game in the Abu Dhabi leg of Pakistan's premier domestic Twenty20 league, grabbed 3-32 before Lahore was bowled out for 140 in 18 overs.

In the second match Tuesday, Peshawar Zalmi, 109-4, moved into second place with a six-wicket victory over the defending champion Karachi Kings, who scored 108-9.

Peshawar reached the victory target with 54 balls to spare and is two points behind leading Islamabad United, although Peshawar has played an extra match.

Earlier, opening batsman Jake Weatherald (48) was the top scorer for Quetta and captain Sarfaraz Ahmed provided a late flourish with an unbeaten knock of 34 in his team's competitive total of 158-5.

Lahore, which lost seven wickets for 14 runs in its previous game against Islamabad United, again struggled with the top order and slipped to 6-57 in nine overs.

Shinwari had captain Sohail Akhtar caught in the slip for nought in the first over and left-handed opener Fakhar Zaman (12) was clean bowled by Mohammad Hasnain.

Mohammad Hafeez's (1) struggle in Abu Dhabi continued when Shinwari found the leading edge of the most experienced T20 batsman and had him caught at covers. Hafeez's unimpressive run in the PSL has seen him scoring three single digits scores in the last four games.

But Shinwari returned and had David caught behind in the 16th over before Mohammad Hasnain (2-40) wrapped up the innings by uprooting the middle stump of No. 11 batsman Haris Rauf.

Earlier, James Faulkner continued to impress with his swing bowling when the Australian chipped in with 3-25. Power-hitter Azam Khan made a quickfire 33 off 18 balls before Faulkner had him caught in the deep in his last over and capped another brilliant performance in PSL by having Nawaz caught off his own bowling.

But Sarfaraz ensured Quetta past the 150-run mark by adding 43 runs in the last five overs with Hasan Khan remaining unbeaten on 12. It was only the second win in the tournament for Quetta, which sits last with four points.

In the second match, Peshawar spin bowler Abrar Ahmed took 3-14 and paceman Wahab Riaz 3-34 to helped restrict Karachi. Abbas Afridi was 27 not out and opener Sharjeel Khan scored 25 for Karachi.

Opener Hazratullah Zazai scored 63 runs from 26 balls with eight fours and four sixes to give Peshawar a strong early start. He was named man of the match.