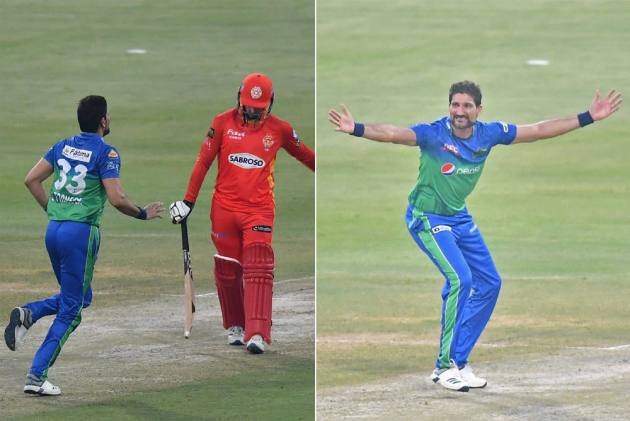 Competing in their fourth PSL season, Sultans will wait for the winners of Tuesday's Eliminator 2 between United and winners of Eliminator 1 (Peshawar Zalmi vs Karachi Kings).

Veteran Pakistan pacer Sohail Tanvir, who still has the second-best bowling figures in the Indian Premier League, rocked United top-order with two early wickets -- removing Colin Munro with the second ball of the innings and captain Shadab Khan in the third over.

Tanvir, 36, returned with figures of 3/17 from his four overs. Another veteran bowler, South Africa's Imran Tahir claimed two for 29.

Aussie Usman Khawaja kept the chase alive after United lost the top four inside the first ten overs. But he eventually became Tanvir's third victim. He made 40-ball 70.

Earlier, Mohammad Rizwan won the toss and opted to bat first. But the Sultans skipper didn't last long, getting out in the second over for a three-ball duck as Akif Javed gave United a dream start.

Sultans scored 35 runs in the last two overs, with the penultimate producing 29 runs as Khushdil hit Akif Javed's last four balls for sixes after Tanvir hit the first ball for a four.

In the league phase, United defeated Sultans by three wickets in Lahore and by four wickets in Abu Dhabi to complete a double.

Last season, Sultans finished third after topping the points table in the league phase with 14 points. They lost the Qualifier to eventual winners Kings by four runs in Super Over, then the Eliminator 2 to Lahore Qalandars by 25 runs in Karachi.