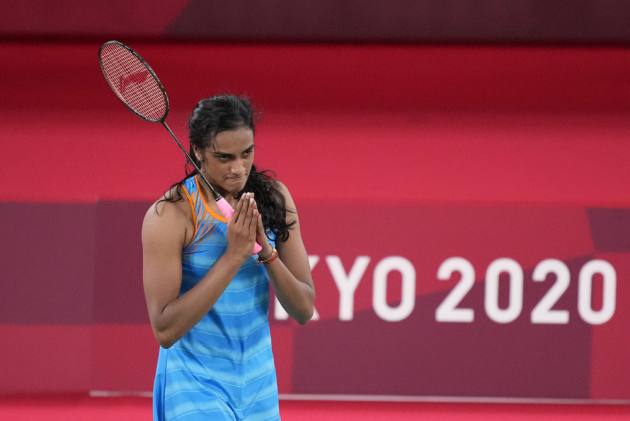 Reigning world champion P V Sindhu on Sunday became only the second Indian and the country's first woman to win two Olympic medals, securing a bronze after a straight-game win over world no.9 He Bing Jiao of China in the badminton women's singles third-place play-off in Tokyo.

Sindhu, who has returned with medals from each of the big-ticket events such as the Commonwealth and Asian Games and the BWF World Tour Finals in the last five years, outwitted eighth seed Bing Jiao 21-13 21-15 to add a bronze to the silver that she had secured at the 2016 Rio Games.

After her win, PV Sindhu told BWF: "I'm on cloud nine. I'm going to enjoy this moment. My family have worked hard for me and put in a lot of effort so I'm very thankful. And my sponsors have given me their best so I'd like to thank them and enjoy the moment."

Wrestler Sushil Kumar is the first and only other Indian to win two Olympic medals, following up his bronze at 2008 Beijing with a silver at the 2012 London edition.

Up against an opponent, who had beaten her nine times so far in the last 15 meetings, Sindhu showed great determination to outplay Bing Jiao with her aggression to scoop India's third medal at Tokyo.

Reacting on Sindhu's win, national chief coach Pullela Gopichand said: "Congrats to our awesome Sindhu on her 2nd successive Olympics medal. While it is all due to the hard work by her and the team of coaches and support staff."

Weightlifter Mirabai Chanu has already gone back after collecting a silver, while boxer Lovlina Borgohain is assured of at least a bronze so far.

Sindhu showed great fortitude as she recovered from her painful semifinal loss to world no.1 Tai Tzu Ying and produced an aggressive show at the Musashino Forest Plaza on Sunday.

Sindhu galloped to a 4-0 lead early on but Bing Jiao started to engage her in rallies and waited for her to make errors.

The rallies started getting intense as Bing Jiao set up the points with her angled returns and flat pushes to claw back at 5-5.

The Chinese didn't give Sindhu pace to play her power game but the Indian soon worked her way around even as her opponent committed a few unforced errors.

Sindhu ended another superb rally with a cross court smash and entered the interval with another down the line hit at 11-8.

The Indian stepped up the pace after the break to gather three more points and looked in total control to pocket the opening game when her opponent went wide.

After change of ends, Sindhu continued her aggressive game, egged on by coach Park Tae-Sang from the sidelines, to lead 4-1 with a cross court return.

Bing Jiao tried to change the momentum but Sindhu rode on her attacking half smashes and slices to keep her nose ahead at the interval with a three point advantage.

Bing Jiao erased the deficit quickly before a precise smash on the line helped Sindhu wrest back control. She soon restored the three point advantage with another cross court drop.

The Indian didn't let the advantage slip and grabbed five match points with another of trademark smash and when Bing Jiao went wide, she held her head in disbelief before letting out a cry of victory.

Earlier, men's singles player B Sai Praneeth and the men's doubles pair of Chirag Shetty and Satwiksairaj Rankireddy had failed to qualify for the knockout stage.