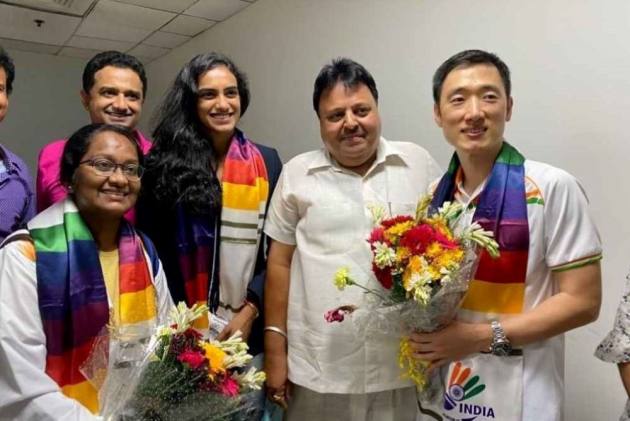 The only Indian woman to win two Olympic medals, shuttler P V Sindhu on Tuesday received a warm welcome on her return to the country after claiming a bronze at the Tokyo Games. Tokyo Olympics | Full Schedule | Sports News

Reigning world champion Sindhu, who had won a silver at the Rio Games five years ago, walked out of the Indira Gandhi International Terminal amid a round of applause from the airport staff. She was flanked by security officers and wearing a face mask.

The star Indian shuttler was received by Badminton Association of India (BAI) general secretary Ajay Singhania, along with other officials of the Sports Authority of India (SAI).

Sindhu and her Korean coach Park Tae-sang were also felicitated by Singhania at the airport.

"I am very happy and excited of course, every body congratulated me and I am thankful to BAI and everyone for supporting and encouraging me. It is an exciting day and happy moment," Sindhu said.

By winning the bronze on Sunday, Sindhu became only the second Indian and first women athlete from the country to bag two Olympic medals.

The 26-year-old from Hyderabad defeated China's He Bing Jiao in the bronze medal play-off.

Later in the day, sports minister Anurag Thakur on Tuesday hailed Sindhu as a sporting icon and one of the 'greatest Olympians' the country has ever produced.

"PV Sindhu is amongst India's greatest Olympians. She is India's icon, inspiration and has caught the imagination of every Indian who dreams of playing for the country," Thakur said after felicitating Sindhu and her Korean coach Park Tae-Sang here.

"Her incredible achievement - that of winning two Olympic medals in two consecutive Olympic Games will inspire a generation of budding athletes. Her success shows how the Target Olympic Podium scheme of the government has nurtured our Olympic hopefuls towards a podium finish."