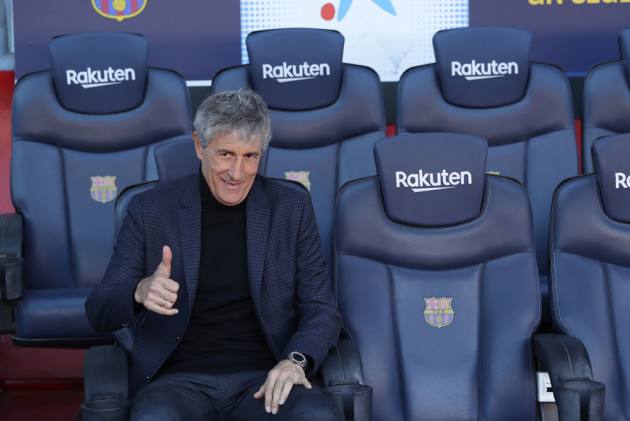 Quique Setien says the thought that Saturday's Champions League last-16 clash with Napoli could be his last as Barcelona head coach has not crossed his mind. (More Football News)

Setien only replaced Ernesto Valverde in January but has had to contend with questions about his future early in his reign.

The 61-year-old, who signed a two-and-a-half-year deal, insisted before Real Madrid were crowned LaLiga champions last month he "does not spend a minute" thinking about whether he could lose his job.

Barca and Napoli will do battle for a place in the quarter-finals of the Champions League at Camp Nou in a tie locked at 1-1 after the first leg in February.

Setien says he has not even pondered whether he could be sacked if the Catalan giants crash out.

"It has not crossed my mind at any time that tomorrow is my last game. We have prepared for the game thinking that we are going to continue," he told the media on Friday.

Ousmane Dembele (hamstring) is not ready to return to face the Serie A side, but Antoine Griezmann (thigh) was named in the squad.

Setien feels Barca have benefited from a break following the conclusion of the domestic season.

He added: "When we finished the league, it was with a positive mindset. Both the players and myself needed a break because after so many consecutive matches it really took its toll on us.

"But I think now we have had sufficient time to prepare for this match; to recuperate physically, take a few days off and come back with a renewed energy that has allowed us to have some very good training sessions and prepare in the best way possible."

Setien says the Blaugrana are prepared to adapt if their game plan is not working in the decisive encounter.

He said: "We have thought about everything and assessed for a long time which was the best option to play this game. We have taken a variant that does not mean that we cannot change it at some point in the game.

"They are a team that can hurt us with the ball, combines well, has greatly improved in possession, is very disciplined defending. It will be a game with alternatives."