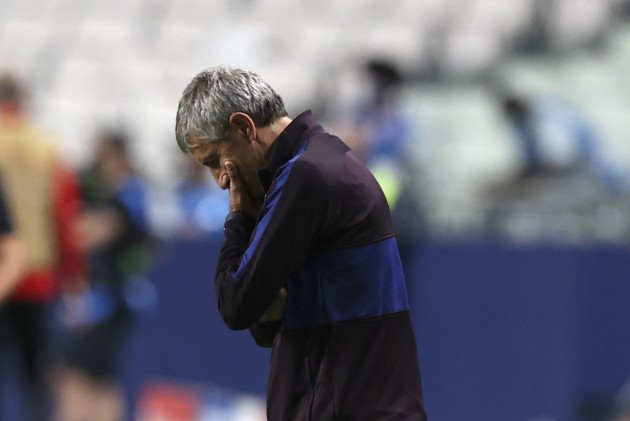 Josep Maria Bartomeu said Quique Setien "is out" as the Barcelona president confirmed the sacking of the under-fire head coach. (More Football News)

LaLiga giants Barca conceded eight goals in a game for the first time since 1946, with Setien – who replaced Ernesto Valverde in January – accepting his future was out of his hands at Camp Nou.

With Barca reportedly poised to officially announce the 61-year-old's departure on Monday, Bartomeu told COPE's Tiempo de Juego on Sunday: "Setien is out".

It comes as former defender Ronald Koeman emerges as the frontrunner to become the next Barca coach.

Netherlands boss Koeman had been linked to Barca after Valverde was sacked, before the beleaguered Spanish powerhouse eventually turned to Setien.

Koeman previously revealed his Netherlands contract contains a clause that allows him to depart for Camp Nou following Euro 2020, though the European Championship has been pushed back 12 months due to coronavirus.

ALSO READ: Who Will Replace Setien As Barcelona Head Coach?

In June, Koeman – who won four LaLiga titles and the European Cup/Champions League during his time at Camp Nou – told Catalunya Radio: "Everyone knows it's my dream to coach Barca".

Barca have endured a forgettable 2019-20 season, dethroned by bitter rivals Real Madrid in LaLiga after the campaign was postponed in March due to the COVID-19 pandemic.

Barca's on- and off-field woes have also prompted renewed speculation over Lionel Messi's future, with the superstar captain reportedly ready to quit the team amid ongoing links to Serie A side Inter and Premier League giants Manchester City.