As per the new format, which has been formulated due to the COVID-19 pandemic, the league has been divided into two different phases. 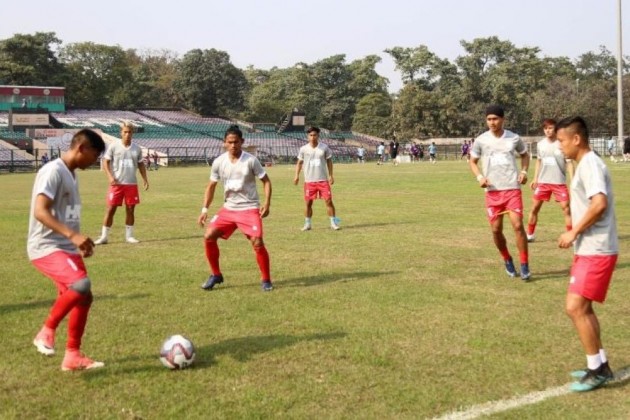 The race for the top six spots in the I-League 2020-21 season is going right down to the wire with three teams still in the running to secure a place in Group A of Phase 2, which has two vacant spots left. (More Football News)

Aizawl FC are currently in seventh place with 12 points, three ahead of Sudeva Delhi FC in eighth place. This means that with one match remaining in the first phase, Churchill Brothers FC Goa, Real Kashmir FC and Gokulam Kerala FC have all secured their berth in the top six thanks to their unassailable points advantage.

Additionally, Punjab FC are also through to the top six as they hold a three-point lead over Aizawl and have a better head-to-head record over the Mizo side courtesy a 1-0 win on January 9, the opening day of the league.

Coming to the bottom half -- Indian Arrows, NEROCA FC, Chennai City FC and Sudeva Delhi FC -- cannot enter the top six as they are behind Mohammedan SC in sixth place by four points or more.

Thus, it is a race between three sides, namely TRAU FC, Mohammedan SC and Aizawl FC for the fifth and sixth spots on the points table going into Round 11.

With all three teams in action one after the another on Sunday, the tussle promises to be an enthralling one.
In the first match, Mohammedan Sporting (13 points) take on an unbeaten Real Kashmir at 2pm, with the Black Panthers behind TRAU (13 points) by virtue of an inferior goal difference (their match ended in a 2-2 draw, hence they cannot be separated on head-to-head).

Next, TRAU will face Sudeva Delhi FC in Kalyani at 4pm, followed by a 7pm kick-off, where Aizawl FC will cross swords with Chennai City FC in a clash between two former champions.

Should Mohammedan SC and TRAU win their respective games, they will ensure their place in the top six irrespective of Aizawl FC's result later in the day.

Aizawl will only be in contention if either Mohammedan or TRAU or both drop points in the first two games on Sunday.

If Aizawl FC win their fixture and both Mohammedan SC and TRAU do not win, then the side with the better result on the day will qualify alongside Aizawl FC.

Should both Mohammedan and TRAU have the same result, the team's goal difference comes into the picture since they are level on head-to-head.

TRAU are ahead by four goals (+3 and -1), which means that both TRAU and Mohammedan drawing their games will see the Manipuri side through to the top six.

If both teams lose, TRAU will have to lose by an extremely lopsided margin as compared to Mohammedan for the Black Panthers to go past them.

If both sides are level on points, head-to-head and goal difference, then goals scored will decide the team that finishes above the other, where TRAU lead by seven goals for now.

In case Aizawl FC draw their match, they could be level on points with either of Mohammedan or TRAU, or even both -- should they lose their respective games.

Interestingly, if only TRAU and Aizawl are level on points, then it is TRAU who have the advantage in the head-to-head (TRAU defeated Aizawl 1-0 on February 9, 2021).

On the other hand, if only Mohammedan SC and Aizawl have equal points, then Aizawl have the upper hand (Aizawl beat Mohammedan 3-0 on February 18, 2021).

In the scenario of all three teams ending up on 13 points (Aizawl draw and Mohammedan and TRAU lose their respective matches), then the points from the matches between the three teams (head-to-head) will be considered.

In that case, it is TRAU who will finish in fifth place on the overall points table (having beaten Aizawl 1-0 and drawn 2-2 with Mohammedan, to accrue four points from the matches against the other two sides).

Aizawl FC will take up the sixth spot (having lost 0-1 to TRAU and beaten Mohammedan SC 3-0, to accrue three points from the matches against the other two sides).

Meanwhile, Mohammedan (having lost 0-3 to Aizawl and drawn 2-2 against TRAU, to accrue one point from the matches against the two aforementioned sides) will be out of the Top 6 as they will be placed seventh.

As per the new format, which has been formulated due to the COVID-19 pandemic, the league has been divided into two different phases.

The first phase, which is set to conclude on Monday (March 1, 2021) will see all the teams play one match against each other in a round-robin format. After every team completes 10 matches each, the 11 participating teams will be divided into two groups – Group A and Group B.

Group A will consist of the teams that finish in the top six spots in the first phase. During this second phase, these six teams will again play a match each against each other in a round-robin format.

The points from both the phases will be put together to determine the champion (the team that finishes at the top of Group A).

On the other hand, Group B will comprise of the teams that finish in bottom five of the first phase. Much like Group A, the five teams in Group B will also play a match each against each other once — in the round-robin format.

The points from both the phases will be accrued together to determine which side (bottom-placed) gets relegated.