George Floyd's killing by white cops in Minnesota has sparked worldwide rage against racism. Now Darren Sammy has blown the lid on some leading Indian players 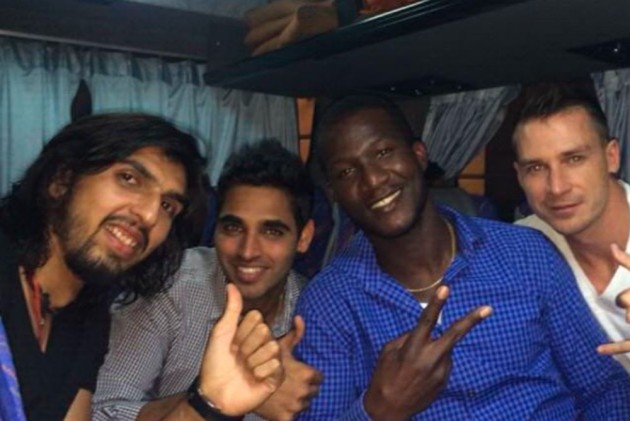 Sammy, 36, shared an emotional video on his Instagram account, with a message which read:
"Recently I discovered a word that I was being called was not what it actually meant I need some answers. So before I start calling out names I need these individuals to reach out and please tell me there’s another meaning to that word. I saw u as brothers."

The former Windies captain, who is also an honorary Pakistani citizen, had earlier revealed that he and Sri Lanka all-rounder Thisara Perera were called "kalu" when they were part of the IPL.

Sammy said that he was listening to Indian American comedian Hasan Minhaj who was explaining how "some in his culture" describes black people, and how he was angry after listening to him.

"I want to address something quickly. Look, I have played all over the world and beloved by many people. And I have embraced all the dressing rooms I have played in. But I want to quickly say this, I was listening to Hasan Minhaj, talking about how some in his culture, you described black people. Now that doesn't apply to everybody. But, I say this because of something I experienced. So, I said, I was angry after listening to him -- describing the word that they used to describe black people which he was saying is not in a good way. You know, and it was degrading. So, instantly I remember when I played for SunRisers Hyderabad in 2013 and 2014. I was called that exact same word that he described... that was degrading, to us black people," Sammy said.

African-American George Floyd's killing by white cops in Minnesota, USA has sparked worldwide rage against racism. Now Sammy has blown the lid on some leading Indian players. But few of Sammy's teammates including Irfan Pathan have refused the claim.

"So, I ... instantly got very angry about it, knowing now what that word meant. I will be messaging those people. You guys know who you are and I must admit at the time in which I was being called that, I actually did not know what did it meant. I thought it meant strong stallion or whatever it is. And I saw no problems with it. Because I was ignorant to the fact that I didn't know what it meant. I assumed it meant something else... that was [what] I believed in.

So recently I discovered a word that I was being called was not what it actually meant I need some answers. So before I start calling out names I need these individuals to reach out and please tell me there’s another meaning to that word and when I was being called it,it was all in love. #blackandproud #blackandconfident #clarasboy #saynotoracism #stopracism #cricketer #stlucia

"But, every time I was called it, towards me and Thisara Parera, there was always laughter in the moment. So, me being a team-man, I thought, "Hey teammates are happy, it must be something funny." But you could understand my frustration and my anger when it was pointed out to me that it wasn't funny at all. It was degrading," Sammy continued.

Me, bhuvi, kaluu and gun sunrisers

"So, I am gonna be texting you guys and asking you guys when you repeatedly called me that word over and over again, to the point that, I was even seeing that's my name. Did you'all meant it in any way should perform as a degrading word to me. Cause, that's important. Like I said, I have had great memories in all the dressing rooms that I have been in -- as a T20 player, as a leader in a dressing room, as a captain. I have always been the one to build up the relationship, or build it up a team, not bring it down," Sammy added.

"All those who used to call me that, you guys know yourselves. You know, some of you have my numbers.... you have got me on Instagram, on Twitter, or whatever. Reach out to me. Let's have a conversation. If it was in any way what perform what Minhaj said it meant, then I am going to be very disappointed. And I will be still out, still be angry and deserved an apology from you guys. Because I saw all of you as my brothers. So, talk to me. Reach out to me. Please clear the air.

"And to all the other boards like I mentioned earlier, this is why it is important to take a stand against all the racial injustice. Against any human being that is not accepted. But, for now, the movement around the world, the black people, everybody, stand up against racism. That should be the message. Waiting to hear from you guys," the Windies legend urged.