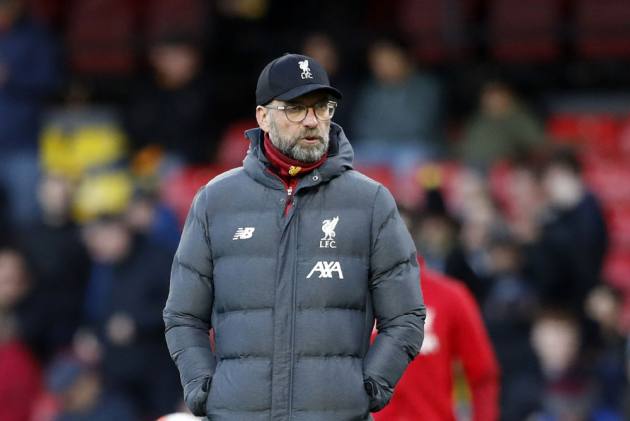 Jurgen Klopp hopes the Black Lives Matter movement can bring lasting change to football and society at large, labelling those who continue to engage in racist behaviour as "unbelievably dumb" and "idiots". (More Football News)

Following the death of African American man George Floyd in police custody last month, anti-racism protests swept the globe and the Premier League gave its backing ahead of this week's restart.

For the forthcoming round of fixtures, players' shirts will bear the message "Black Lives Matter" above their numbers, as was the case during the Manchester City's midweek win over Arsenal and the goalless draw between Aston Villa and Sheffield United. At the start both matches, all players took a knee.

Liverpool make the short trip for a behind-closed-doors derby against Everton at Goodison Park on Sunday, with Klopp's men five points from a first top-flight title in 30 years.

Elite football returns in a global landscape fundamentally altered by the coronavirus pandemic and Klopp praised his captain Jordan Henderson for his part in launching the Players Together charity, while also lauding Manchester United forward Marcus Rashford for lobbying the UK government to extend meal voucher provision for vulnerable children during the school holidays.

Speaking to a virtual news conference, the Liverpool boss was keen to make a distinction between three important causes where footballers have stepped forward.

"If football is a role model for anything in life, then it's for equality – that everybody is exactly the same. Where we come from, wherever you are from, exactly the same," he said.

"It's all about who you are, not which colour you are. I know from my point of view [you think] it's easy to say that but it's not easy; it's just for us in football it's completely natural. That's how it should be everywhere.

"Judge people only because of who they are and not any other things. It's so dumb. It's so unbelievably dumb not doing it like this that it's hard for me to even understand a little bit why it could be like this.

"But it is like this, so we have to stand up or we have to kneel. Whatever we have to do, we will do. The past we cannot change but the future we can change. That's what we all should try."

It's press conference time once again!

Join Jürgen Klopp live for the latest team news ahead of #EVELIV and our return back to football... https://t.co/Gs5hajL5fS

Although largely applauded, the Premier League's alignment with Black Lives Matter has drawn some criticism along the lines of sport mixing with politics.

Klopp feels there is an easy distinction to be made.

"For me, this thing is not a political problem, it's a society problem," he said. "We are all part of the society, so we should have an opinion at least. If you have an opinion you can speak about it.

"Sports and politics should not be together, that's something I agree on, kind of. It depends on the subject.

"But this is absolutely a society thing. It's all about how we have to show finally to everybody that we are all the same.

"It's about in this moment making a clear stance from all of us that there are maybe some idiots, but there are not as many as we think. They are not that powerful, hopefully, and we can change the world with action."

Players Together was set up by Premier League players to help fund NHS charities in April, before Rashford took even more direct action in a campaign that came to fruition this week.

UK health secretary Matt Hancock had called for footballers to "play their part" in addressing the hardships caused by the coronavirus pandemic, but Klopp feels the desire of players to do good by their communities should never have been in doubt.

"What Hendo and the players did during the lockdown – I'm proud of the players, but I'm not surprised because I know that the players do a lot of things without really talking about it," he said. That makes me proud.

"I was not surprised the players were immediately ready to help in this difficult time."

On Rashford, he added: "What Marcus Rashford did, I couldn't respect it more, it's unbelievable. It's a little bit of a shame he had to do it. These things should be just natural.

"But there was something to do and he did the job in an incredible manner."