India head coach Rahul Dravid stressed the importance of giving opportunities to the youngsters, especially with a cramped cricket schedule ahead. 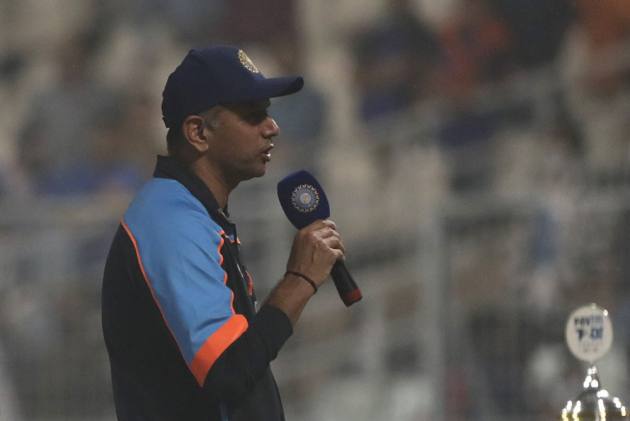 India head coach Rahul Dravid on Sunday hailed the team's dominating 73-run win against New Zealand at Eden Gardens, Kolkata. But the former India captain also advised the cricketers to keep their feet on the ground, saying they need to "be a bit realistic about this win." (More Cricket News)

Both sides opted to field relatively young teams with senior players either rested or opting to take a break. India, with skipper Rohit Sharma in sublime touch, didn't miss Virat Kohli;  but the Kiwis will rue the absence of Kane Williamson.

The batting greats opted to heal their bodies after the rigours of ICC Men's T20 World Cup in the UAE, where they had been camping for months for the Indian Premier League.

"It was a really good series win. Everyone played really well right through the series. It feels good, nice to start well. We are also quite realistic. We have to keep our feet on the ground and be a bit realistic about this win," Dravid said at the post-match presentation in Kolkata.

In fact, the Kiwis landed in Jaipur less than 24 hours after losing the World Cup final to Australia in Dubai, then took the field on November 17. It was followed by matches in Ranchi on November 19 and Kolkata.

"Not easy for New Zealand to play a World Cup final and then to turn up three days later and play three games in six days... It was never going to be easy for them. It was nice from our perspective but we have to learn from this series and move forward," the former head of National Cricket Academy said while lauding the effort from the Kiwis.

But the absence of regular players like Kohli, Jasprit Bumrah and Ravindra Jadeja was also a blessing for India. Unheralded Indian players turned up and took their chances. During the three-match series, India handed debuts to IPL performers Venkatesh Iyer (Kolkata Knight Riders) and Harshal Patel (Royal Challengers Bangalore).

As acknowledged by Rohit earlier, Dravid also stressed the importance of giving opportunities to the youngsters, especially with a cramped cricket schedule ahead. The next edition of the T20 World Cup in Australia is scheduled to start on October 16.

"It's been really good to see some of the young guys come through. We have given opportunities to some of the boys who haven't played a lot of cricket over the last few months.

"We have seen some of the skills available to us and we have to keep building on those skills as we go forward. It's going to be a long season between now and the next World Cup being realistic with how much cricket some of our experienced players will play," Dravid added.

The two teams will now head to Kanpur for the first Test, starting November 25. The second Test starts in Mumbai starts on December 3.