Rangers had two players sent off as they were eliminated from the Europa League at the last-16 stage with a 2-0 loss against Slavia Prague at Ibrox. 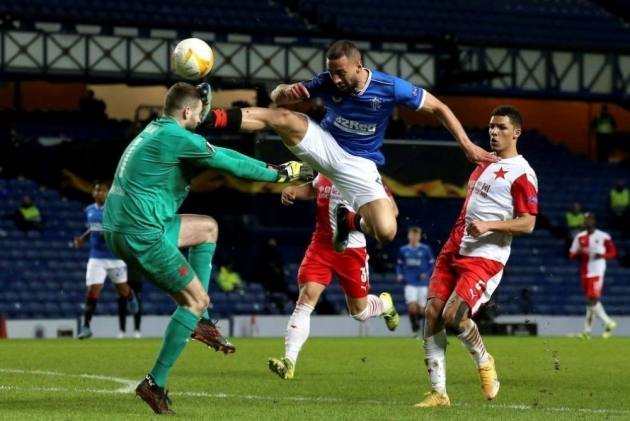 Rangers had two players sent off as they were eliminated from the Europa League at the last-16 stage for the second season running with a 2-0 loss to Slavia Prague at Ibrox. (More Football News)

The recently crowned Scottish champions entered the second leg on home soil, where they had gone 21 games without defeat, with a slim advantage after last week's 1-1 draw in Prague.

But Peter Olayinka put Slavia ahead on aggregate with a first-half header and the Gers collapsed in the second half – substitute Kemar Roofe and defender Leon Balogun both seeing red.

Nicolae Stanciu curled in a fine free-kick following the foul which resulted in Balogun's dismissal, sealing a 3-1 aggregate victory for Slavia, who knocked out Leicester City in the last round.

Allan McGregor produced a sublime late save in the first leg but was too easily beaten by a powerful Olayinka header 14 minutes in on Thursday.

Olayinka got between two Rangers players and guided captain Jan Boril's cross past McGregor, who could not keep it out at his near post.

Ondrej Kolar was instantly called into action to keep out Ryan Kent's shot, though Rangers otherwise toiled and might have conceded a penalty before half-time.

Balogun brought down Abdallah Sima in the box but a quick VAR check agreed with referee Orel Grinfeld's decision to let play continue.

Rangers did not heed that warning, however, and their task was made all the more difficult when Roofe caught Kolar with a high boot, forcing Slavia into a change of goalkeeper.

Steven Gerrard's team needed a goal to take the game to extra-time but Balogun received a second yellow after catching Lukas Masopust.

Stanciu, also on target in the first leg, lifted the resulting free-kick into the top-left corner.

An ill-tempered encounter ended in a tussle between both teams – Rangers taking umbrage with a comment from Ondrej Kudela towards Glen Kamara as they suffered a first defeat in 19 matches.

What does it mean? Gers outclassed on home soil

Having sealed a first Scottish Premiership title in a decade earlier this month, Rangers' sole focus was on reaching a first European quarter-final since finishing as runners-up in the 2007-08 UEFA Cup.

Gerrard's men had seemingly done the hard work by earning an away-goal draw in Prague yet, despite a full week's rest, they were way below their best at Ibrox and were tactically outclassed by their opponents.

Slavia may have had slightly less of the ball (49.6 per cent to 50.4), but they were easily the better side on the day and can look forward to a second quarter-final appearance in three seasons.

Olayinka set up Stanciu's goal in last week's first leg and was on target here with an important breakthrough goal to continue his fine run of form in the competition.

The Nigeria striker has been directly involved in five goals in his last nine European outings - three goals and two assists - having been involved in just three in the previous 24.

Roofe was brought on early in the second half for the ineffective Scott Arfield, who failed to justify his recall, but was sent off just six minutes later without having a single touch of the ball.

It was a deserved red card, as was the one that followed 12 minutes later for Balogun, meaning Rangers had two players sent off in a game in major European competition for the first time ever.

- Rangers have now been eliminated from seven of their eight Last 16 ties in the Europa League/UEFA Cup, only progressing against SV Werder Bremen in 2007-08.
- Slavia picked up their first away win against Scottish opposition in Europe. They have reached the quarter-finals of the Europa League/UEFA Cup for a fourth time.
- Rangers have suffered their first home defeat of the season, having been unbeaten in all 21 matches at Ibrox in all competitions prior to today (W20 D1).
- Slavia's Olayinka is one of two players to score three headed goals in European competition this season – along with Slavia Prague team-mate Abdallah Dipo Sima.
- Rangers had two players sent off in a single game in major European competition for the very first time.

Rangers travel to Old Firm rivals Celtic on their return to Scottish Premiership action on Sunday, the same day that Slavia host Opava in the Czech First League.