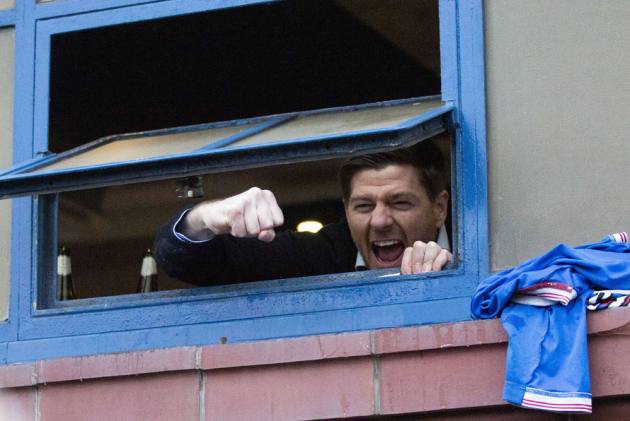 Rangers have been crowned Scottish Premiership champions for the first time in a decade after Celtic slipped up at Dundee United on Sunday.  (More Football News)

Steven Gerrard's side had moved to the brink of glory on Saturday, a 3-0 home win over St Mirren leaving them needing just one more point to get over the line – provided Celtic triumphed at Tannadice less than 24 hours later.

However, with their Old Firm rivals only able to draw 0-0 on the road, Rangers were able to celebrate a first top-flight title in Scotland since the 2010-11 season, in the process ending Celtic's run of success in the competition.

Securing the league also gives Gerrard the first trophy of his managerial career in his third season in charge at Ibrox. They had finished second in the previous campaigns under the former England international, as well as losing the 2020 League Cup final.

Gerrard said after the victory over St Mirren that the club had been "to hell and back over the past 10 years", having been forced to start afresh in the fourth tier of Scottish football following major financial problems, including liquidation.

55 - @RangersFC have won their first Scottish Premiership title in 10 years, last doing so in 2010-11 under Walter Smith – indeed, this is their 55th title in the Scottish top-flight, the most of any side (Celtic, 51). Bragging. pic.twitter.com/lkF675Mfmf

The Gers eventually completed the journey back to the Premiership in 2016, though had been unable to end the dominance of their Glasgow neighbours in recent years.

Celtic were bidding to win a 10th consecutive league crown this term, a feat neither club had previously managed to achieve. However, while the defending champions have stuttered, eventually leading to the departure of Neil Lennon, Gerrard's Rangers have dominated.

A total of 77 goals averages out at 2.4 per game. Full-back James Tavernier – the team's penalty taker – is leading scorer with 11, but forwards Kemar Roofe (10) and Alfredo Morelos (10) have also reached double figures.

However, it is an outstanding defensive record that has underpinned their charge: Rangers have conceded just nine goals, which works out at a ridiculously low 0.3 per outing.

The clean sheet against St Mirren was their 24th in the league, while they have not committed a defensive error that has led to an opposing team scoring so far, per Opta data.

Rangers have scored first in 28 of their 32 league outings and only once have they failed to triumph after breaking the deadlock, while just four points have been dropped all season from a winning position.

There remains the possibility of further silverware before the season is over, too. Rangers are still in the Europa League, with Slavia Prague their opponents in the last 16.